As this was my last day in Japan, the day was spent doin the last of the main things I wanted to do this trip. Unfortunately due to various constraints, I was unable to go to Nikko. This I didn't mind too much as I've seen and done some incredible things and on the last day I got to go to the Sky Tree Tower.

First stop of the day was Asukasa. I'd decided early on that if I had enough money remaining that I woud buy my mother a silk yukata (the word "kimono" has often been used but these days the yukata has generally replaced the kimono). Locating the shop I'd purchased my yukata from turned out to be relatively easy.

If anyone is in the area and is interested in buying one, the shop is called "Fujiya" and . The owner spoke excellent English and seems to cater to westerners as well as locals.

Next we searched for the Sky Tree Tower. This actually proved quite easy as it is the tallest structure in the area - just head in it's direction, it's not hard to miss. The only issue we encountered is that, due to it's size, the distance could be quite deceptive. We thought we were getting quite close but were still quite a distance from the tower.

As Kyle wasn't particularly interested in going up the tower, wee agreed that he'd keep himself entertained while I went up the the viewing deck. Upon arrival I was issued with a numbered ticket telling me to go to an entry gate at 17:30. It appears that the tower is so busy that this timing system is required just to buy tickets. As this was something that I really wanted to do, I took the ticket and went to find other amusement while waiting (it was only 13:00 at this point).


As none of us had eaten, that most important of affairs needed to be sorted - lunch! Trying something new, we went to a place called "Pepper Lunch". This restaurant served hot rice in a heated metal dish. The idea is that you control how cooked your meat is and then add your desired sauce when ready.

We also found a convenience store where we could buy wash bags. Reason being the Yukata need to be washed in one (when machine washing) to prevent damage.

At 17:30, after much queueing, I finally purchased my ticket and ascended the lift fto the main viewing floor. This is around 300 metres, same as the upper deck at Tokyo Tower. The views were spectacular and due to the time, I was able to see Tokyo in both daylight and the dark. As there were additional queues for the upper deck, I opted to forgo it. Sky Tree, in my opinion, was certainly wirth the 2000 Yen for admission. 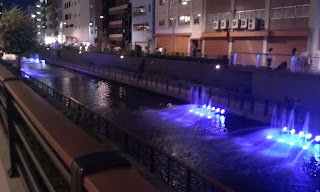 The days events complete, I headed back to get an early night. The following will be a long day!
Posted by Daniel Snowden at 08:39