I've been a little lax in keeping this thing up to date.

The day I arrived was the hottest day of the year so far, the second day was only slightly cooler.  I was warned that August is an incredibly hot month in Japan but I really had no idea.  Those who may have seen some pictures I posted before from Japan of the ubiquitous vending machines will start to realize why they are there.  The ability to grab a cold bottle of water has been a Godsend.

Didn't get up to much on day 1, mainly settling in.

I went back to Akihabara on day 2.  In one of the stores I saw I well made Yu-Gi-Oh! figure that I've decided to purchase. 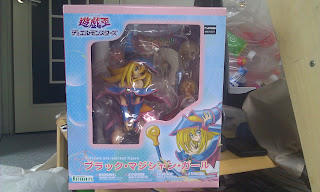 Getting from Misato to Akihabara, I've found that the most efficient way is to go to Shin Misato station (Mushashino line, 1 stop) and then get the Tskuba express to Akihabara.  Only problem there is that Tskuba Express is not part of Japan Rail so I can't use my JR pass on that leg.

In the evening we grabbed dinner at a nice traditional style restaurant.

On the way back I noticed that the Seven Eleven had some Melon Bread (メロン パン) - Something I can never resist! 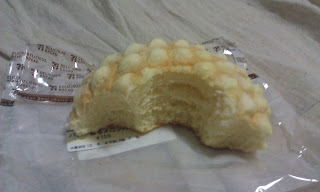 Things are getting off to a slower start from before as last time there was a lot to cram in to 8 days.  This time round the pace is much more relaxed and there's a little more time to get used to the warmer conditions.

During the night (while we were talking to Setoguchi San in a skype call) I experienced my first earth quake. Given that this occured just seconds after not using the correct honorific, I did wonder if the 2 were linked.  Earthquake was a small one (Likely a 2), small ones are quite commonplace.

Most of today is going to be getting final preparations in place for going to Osaka/Hiroshima.  Going to get the overnight bus tomorrow.
Posted by Daniel Snowden at 17:38