The Start of the Trip – Adventures in Travel
Congratulations reader, if you’ve got this far then you can clearly stand my style of travel writing!  As you may have gathered, it’s time for my (seemingly annual) trip to Japan.  Once again, I’ll be staying over with Kyle in his “spacious” abode.
So what do we have in store for this journey? This time round, Lufthansa proved to be a little more expensive than usual (usually they’re the cheapest option) and with my disappointment in their removal of the A380 SuperJumbo from the Frankfurt to Narita route I decided it was time to investigate alternative options.  This time round I’m flying with Finnair on the way out and JAL on the way back.  The short legs of these journeys are both codeshares.  So the way the journey looks is as follows:
Manchester to Helsinki (Finnair, operated by FlyBE), Helsinki to Tokyo Narita (Finnair), Tokyo Haneda to London Heathrow (JAL), London to Manchester (JAL, operated by BA).
So I’m travelling with 4 airlines I’ve never used before and 3 airports I’ve never used before.  This could get a little… stressful.  I think I’d started to take for granted the fact that I had become quite familiar with Frankfurt/Munich/Narita.  When you know where most things are in the airport it makes it easier to find the gates etc that you need when embarking, disembarking and transferring.
Enough of the aviation geekery.  So far the trip is getting off to something of a mixed start.  I cleared security in no time at all (although there was some queuing at the baggage drop off desk) so I’ve gotten through to the gates with plenty of time to spare (and time to write).  Unfortunately that was offset by a serious blonde moment – just after clearing security I came to the terrible realisation that there was something missing from my head.  I forgot my hat!  I remembered to bring it out to the car, brought it in the car but forgot to take it out of the car.  D’oh!  Fortunately, after enquiring about hats at the SuperDry (which only has baseball caps), the clerk helpfully pointed me in the direction of Timberland and Next as she remembered seeing the style I was looking for.
With the crisis averted (I certainly would not want to get a sunburned head again), it’s time for a cup of tea
while waiting for the gate to be posted.  So far so good.

The flight to Helsinki was pleasant enough.  The Embraer jets (operated by FlyBE) have a surprising amount of legroom compared with the A330 used on the Helsinki to Tokyo leg (seriously, there was more legroom than any other flight I've been on).  A reindeer and cheese sandwich was offered as a free snack.  Now as much as eating reindeer appealed (oh look, I ate Blitzen hahahaha), I'm not keen on cheese so that ruled the sandwich out.
The layover in Helsinki was only two hours.  This was something I was a little worried about, flight delays or delays in clearing security left me wondering if I'd have to make a Usain Bolt style dash for the gate.   As it turned out, there was no additional security between disembarking the first flight and the departure lounge.  Helsinki is a fairly small airport so it didn't take much time to find the gate for the flight to Tokyo.  With a little time to kill and the fact that I hadn't eaten all day I decided to grab some lunch.  As luck would have it, the My City Helsinki restaurant was right next to the departure gate.  There were a number of Finnish and Japanese style dishes available, it generally takes around 15 minutes from ordering to food being ready (so not a big worry if you're pushed for time). 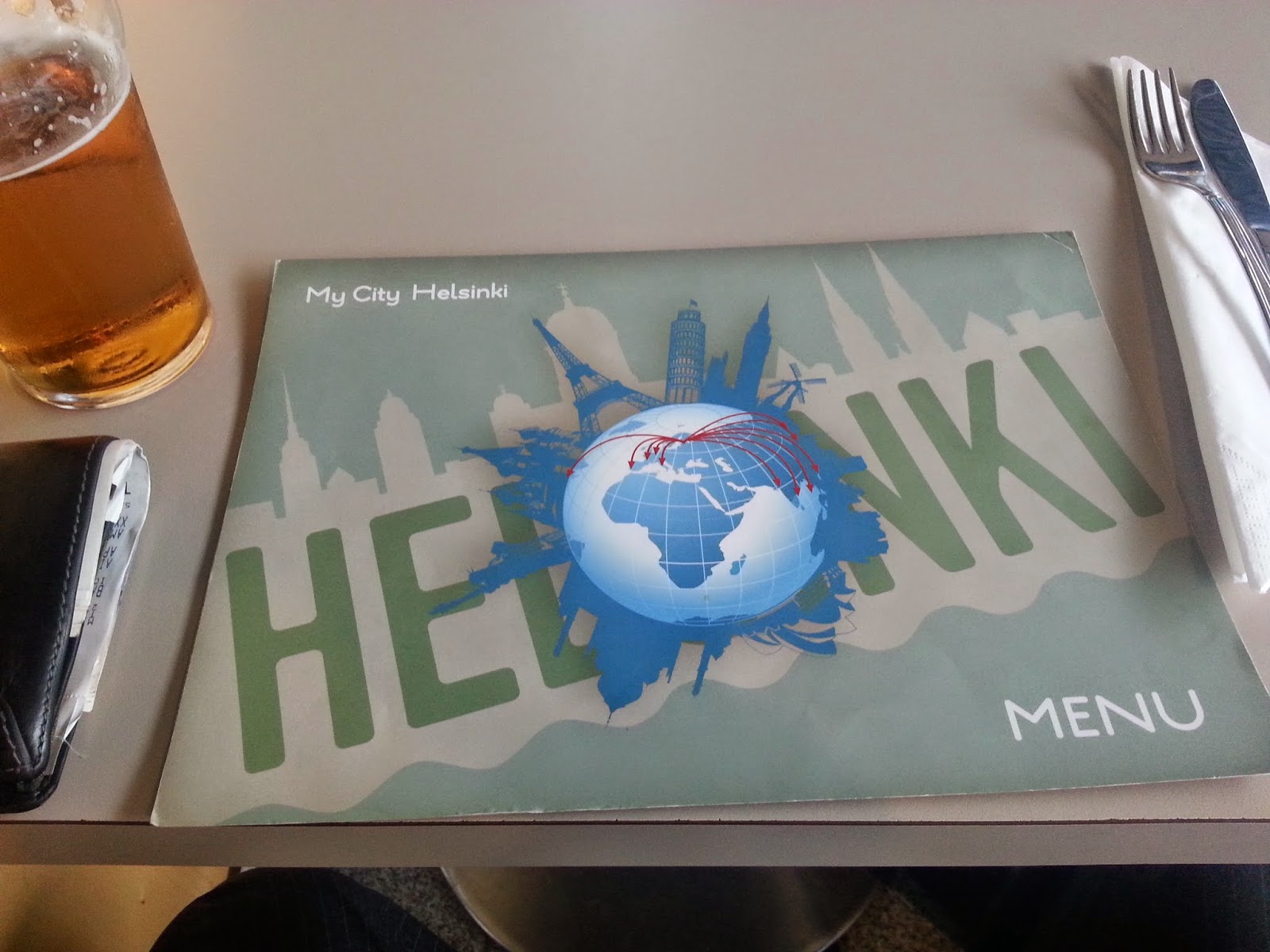 After a lunch of meatballs, mashed potato, roasted beetroot and lindenberry sauce it was time of the flight to Japan.  9 and a half hours... it's times like this I really wish I could sleep on the plane. 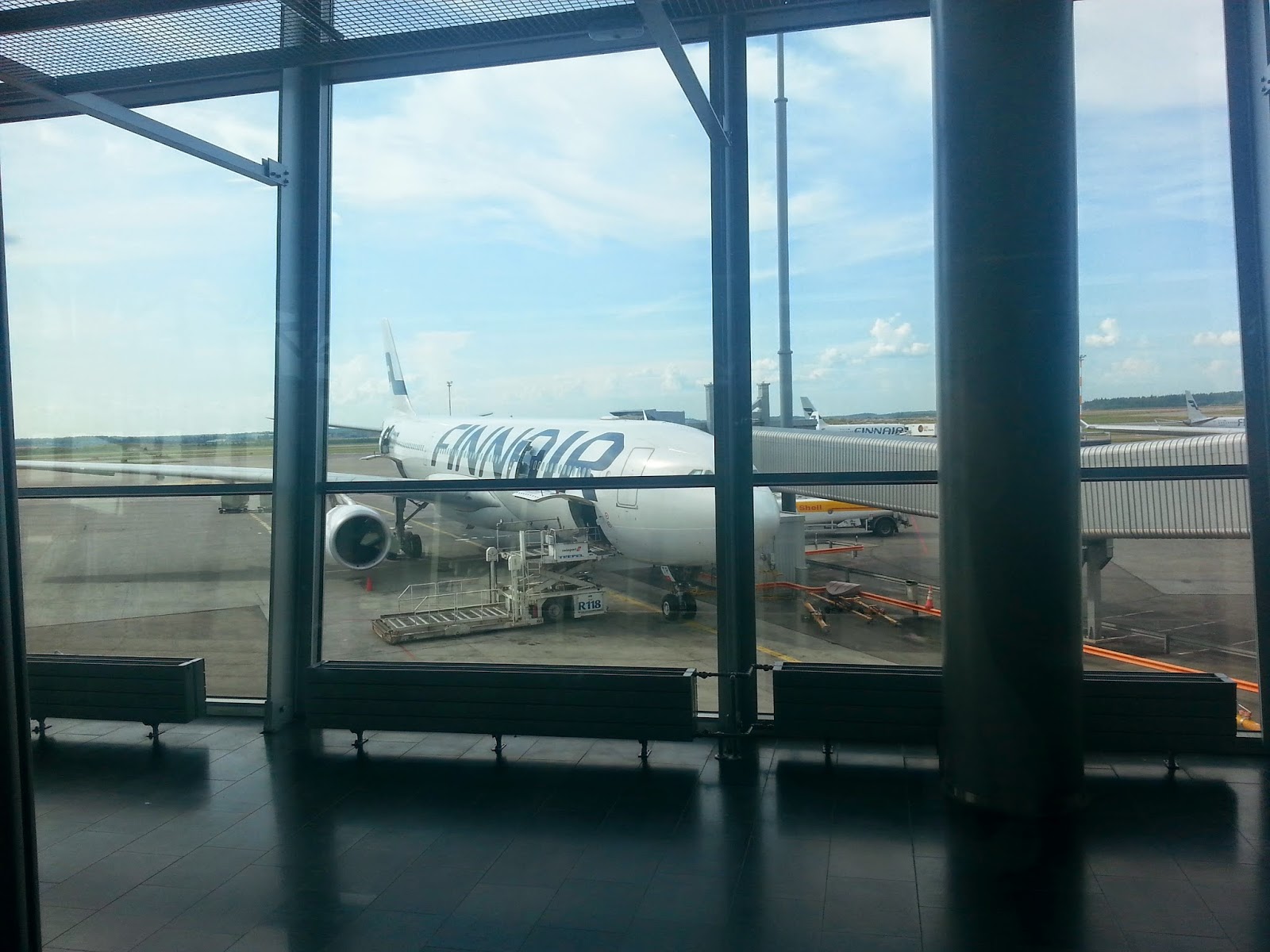 As luck would have it, I'm getting used to long flights and was able to pass the time quite easily.  Next stop, Japan!