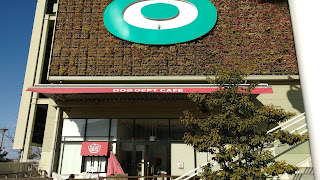 Kyle took the opportunity to introduce me to the Bean&Leaf Café, a great little coffee shop that he’d recently been introduced to. In addition to great coffee, they have excellent deserts. Having filled myself up completely with the kebab, I split a slice of cheesecake with Kyle instead of having a whole slice.
We noticed that there was a special event on at the stage in the middle of the mall. The event in question was some Japanese boy band. They were… not all that good. The autotune was quite clearly being pushed to its limits. To save our ears from any further assault, we quickly vacated the area.
By the time we made it back to Misato, we’d managed to work up quite an appetite. Since we had hamburg steak yesterday we decided to try regular steak. Part of the reason for this was that the local steak restaurant had an unlimited side bar, which included curry and rice. This was more than enough to satisfy the massive appetites we’d managed to build up.
Since it wasn’t too late when we got back, we connected my laptop to the TV in order to put on Yu-Gi-Oh! Dark Side of Dimensions for some entertainment. All was well and good until my laptop started to install the Windows 10 Fall Creators update – oops. By this point it was starting to get late so the movie would have to be postponed for another day.
Posted by Daniel Snowden at 09:44