My plan for the first part of the day was to make a much needed visit to that great shrine of otaku culture – Akihabara.
One of the first things I like to do when arriving in Akihabara is to see what series are being promoted. For example, on a previous trip, I remember seeing some “Kizumonogatari” related promotional materials on the outside of the Atre buildings. This time round it was Fate/Apocrypha, there was also a Blend-S billboard on one of the other buildings. 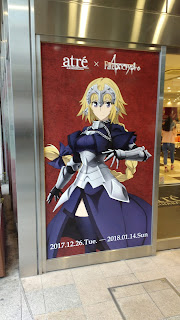 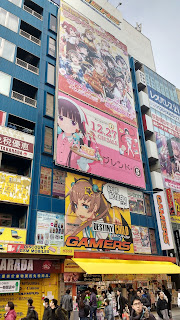 Feeling a little tired from the previous day, the first order of business was to get a some coffee. Fortunately, in Japan, there is no shortage of vending machines capable of supplying caffeinated goodness. While it was tempting to stop by a coffee shop/café (to sit down and enjoy a cup of coffee, I recommend café moco) I was a man on a mission. My mission was to identify and purchase a suitable quantity of figures and character goods. Those who know me from the anime circle will know that I have a particular fondness for Konosuba (and a certain masochistic knight…) so something konosuba related was going to be on the cards.
Browsing around some of the stores, a noticed a few interesting curiosities. First was a cardboard cutout of Reimu (from the Touhou series) in one of the stores (I decided to get a photo of this as there was a sign saying “camera ok”). The second was a promotion for what appeared to be a new manga. I believe the title translated as “Chastity/purity of sadistic girlfriend”. I decided that I’d have to do a little background research in to that series – in the interests of science, it’s not like I’m interested in that sort of thing or anything! (Baka!) 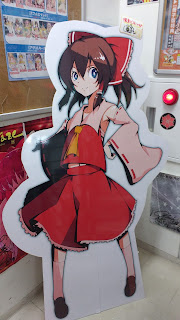 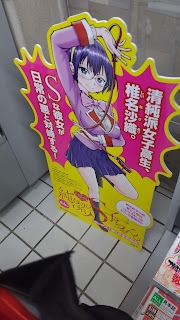 During my shopping trip I found a few items I # interested in, one of which was a “fukubukuro” or “lucky bag”. This is a nice little system for clearing out stock at the end of the year. These are bags with a collection of random items, sometimes you can get some great deals and other times not so much. On a previous trip I got one containing a few random Youkai Watch items. This time I got some rather rare Animal Crossing game cards (buying the 1000 Yen general bag rather than a 5000 Yen “Love Live” bag – I do not like Idol anime!).
Something fun about Akihabara is that you can sometimes find interesting new themes for the old Maid Café concept. One I spotted this time was a “Samurai Maid Café”. It’s different, I’ll give them that! Maid cafes aren’t really my thing, though, and I decided to give that a miss. I also noticed a woman outside promoting an owl café (they have become quite popular) and signs for a few cat cafes. I did at least think “boku to neko” (cat and I) was a somewhat witty name. 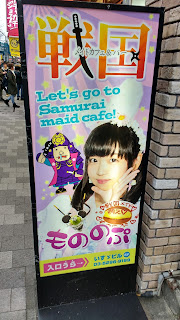 Something new that I found was that there seemed to be a trend to use “itasha” (cars decorated with anime characters) for promotional purposes. I think these were promotions anyway, as I saw the same cars doing circuits of the area to I surmised that they were doing promotions.
One of the first places I checked out was the Shosen Book Tower. I was hoping to pick up some JLPT N4 materials (as I wasn’t able to take classes, I thought it best to continue my studies independently) and to see if I could find another copy of the vocab guide I use for some friends who are learning Japanese. Thee vocab guide wasn’t there, so that would have to be left for another day. I was, however, able to find some reading and grammar guides for N4. For anyone currently living in Tokyo, Shosen has a selection of English books so this is good for those looking for books from home of material to practice reading in English.
During the course of the afternoon, I think I managed to break the pedometer in Google fit. Passing one of the many stores, I spotted a little plush of Puk from Re:Zero. I thought nothing of it at the time but as time went on I lamented myself for not making an impulse buy. Eventually, caving in, I double back and went in search of the plush. After reaching Akihabara station, my starting point, I thought to myself “ah, you missed it. Let’s try again”. Sure enough, after an almost endless walk, there was no sign of Puk. Had he been sold already? Maybe, or was I missing something? Then, I realized my stupidity. I crossed over the road to look in one of the other “Liberty” stores (Liberty have a couple of stores, 2 of which are opposite each other. Sure enough, there he was. With luck on my side, I wasted no time and made my purchase.
Normally, I like to describe (in great detail) the things I eat. Unfortunately I was too focused on shopping to remember to get lunch. By the time it got to 16:00, I started to think that I might be a little late for lunch and early for dinner. With that, I employed the fallback strategy that served me well last time, nikuman from the Family Mart! This helped stave off hunger, but I did regret not getting home run curry at one of my favourite restaurants.
My haul in the end was:
·         A lucky bag
·         Puk
·         (Konosuba) Darkness Nendoroid
·         Kiss Shot figure from Monogatari
·         Darkness keychain
·         Saber keychain (Arturia – the best saber!)
·         A mountain of JLPT materials 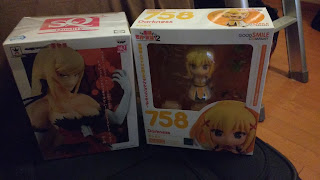 With a successful shopping trip, I headed back to Kyles to drop off my goodies and plan out where to get dinner. The second half of that turned out to be fairly easy, as Kyle was in a rush and wasn’t sure when he could leave he made an executive decision and bought in McDonalds. How very Kyle, but having subjected him to “The Ramen Diet” a few years back, I’m not one to complain. Besides, he was keen to try the new bacon burger. Eating in gave us the opportunity to plan out where to go later on, we were thinking of going to the shrine in Nagareyama but Kyle wanted to check what other shrines might be available in the area so that we could potentially try somewhere new. Not seeing many other options in the area (we were keen to avoid getting the train for practicality), we decided on Nagareyama. Although we’d been there before, it’s a nice shrine and had a good atmosphere before.
Arriving a little early, we were able to have a look around while preparations were being made. Things were pretty quiet except for the… loud gentleman who was clearly annoyed about a number of current events. He was shouting “bakayarou!” (you asshole) at someone, somewhere, and was referring to Kim Jong Un as “baka” (idiot) – I’m sure we could agree on that part. I got the impression that he may have had a few too many drinks, I commend the shrine volunteers for handling the situation in a dignified way. He appeared to get bored and left at some point while we were looking around the main shrine building. It was interesting to see a large number of omomori in a box, these were likely ones that had been given back to the shrine at the end of the year. You see, after a year, omomori are usually taken back after a year to the shrine they were bought from and burned (the blessing only lasts a year).
Being at the shrine just before midnight was a nice experience as everyone present was able to take part in a countdown to the new year. This was initiated by the mayor of Nagareyama who thanked all present for coming, especially the Gaijin – Sometimes it’s good to be a fashionable westerner! The countdown was a great (collective) responsibility, so Kyle and I made sure to practice beforehand (じゅう、 きゅう、 はち、 なな、 ろく、 ご、 よん、 さん、 に、 いち). After the countdown, we made our offering (5 yen in the box then a routine of bowing and clapping) and checked out the area. I decided to get an omikuji (paper fortune), since we were going to be meeting Yaashita in a few days I thought I might be able to ask him for a translation. Knowing my luck, I’ve probably got a bad fortune! 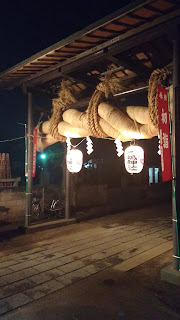 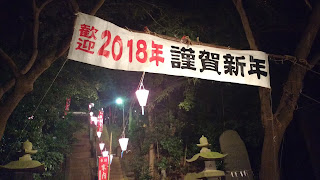 It was getting pretty late so we then decided to had back. At 02:00, we figured it was going to be a pretty late start the next day…
Posted by Daniel Snowden at 10:23