Review - Gin-Iro No Kami No Agito (Origin: Spirits of the Past)

It's been a few months since I first watched this film (and posted a few words on my Facebook profile), so I thought it time for me to write something a little more detail.

I'll start off with a little background.  Origin: Spirits of the Past is a 2006 film by the studio Gonzo and was Gonzo's first foray in to feature films (Previously they've produced series such as the Anime adaption of the Gantz Manga).  I stumbled across this little gem when browsing for DVDs in HMV and noticed Origin for the princely sum of £3 - Worth taking a chance on, I thought.

Origin is set in a post apocalyptic Japan after extensive genetic experimentation on trees caused the trees to become sentient, fracturing the moon, and returning to Earth in a fiery holocaust, wiping out most of the human race and eventually turning much of the surface in to a giant forest.  Not only are the trees sentient, they are incredibly powerful and generally hostile to humans. 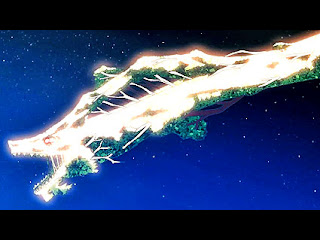 The story starts out in Neutral City, a growing town built in the ruins of the skyscrapers of the cities of old.  Neutral city sits between the forest and the military state of Ragna.  Where the people of Neutral City try to live alongside the forest (negotiating with the forests messengers, the tree-like druids, for the forests water), Ragna intends to use military power to bring the forest under control.


One day, a boy from Neutral City, named Agito stumbles upon an old cryogenic stasis pod.  Frozen in the pod is a young girl, Toola.  Once revived Toola finds it difficult to adapt to a world that seems completely alien to her.  She is further distressed upon meeting Agitos father, a man who became enhanced by the forest to help him build Neutral City.  Having overused the forests power, he began turning in to a tree.  A world of violent trees that attack people, ruined cities and people turning in to trees is too much for her to handle.

Toola was not the only person from the past.  Shunack, an officer in the Ragna army, had previously been discovered but chose to defect to Ragna.  When Shunack tells her that she holds the key to her fathers work, the ability to tame the forest and restore the cities of old, Toola must choose a side.

Overall I liked this film.  It's similar in concept to Hayao Miyazaki's Nausicaa of The Valley of the Wind.  Having seen both, I'd say that Origin is more morally ambiguous than Nausicaa.  Where Nausicaa (the character) has a clear belief in humans living in harmony with the Fukai, Toola is much more conflicted.  As someone out of time and place it is harder for her to choose between maintaining the tentative peace the people of Neutral City have created and using the power of her time to restore the world as it was.


Visually, Origin looks like it was inspired partly by Nausicaa (hardly surprising as Miyazaki is regarded as one of Japans masters of animation).  The steampunk style of the Ragna tanks reminded me of the live action adaptation of Casshern.

Now the crucial question - to watch in Japanese or English?  Having watched in Japanese (with English subtitles) and the English dub I can safely say

Unfortunately, like many Anime films Origin suffers from poor execution.  I felt the ending was a little disappointing.  Not that I'm saying it was bad, I just think it could have been better.

My recommendation:  If you liked Nausicaa or Princess Mononoke I think this film will likely be up your street.  If you're expecting something as deep as Nausicaa or Mononoke, you'll be disappointed.
Posted by Daniel Snowden at 11:36

Email ThisBlogThis!Share to TwitterShare to FacebookShare to Pinterest
Labels: Anime