Boxing day marks the start of my trip to Japan to celebrate new year. This was a pretty last minute trip (only booked around 2 weeks ago) which only became possible due to a change in work schedule. I'd been looking at the possibility of a new year trip previously, so Ryan (already flying out to visit Kyle) suggested joining him.
Without my usual (almost a) years worth of planning (and such close proximity to Christmas), this was a little more stressful to organize than usual. Now that the trip is underway I think I can say that a trip like this does't really need a years worth of planning. It certainly makes it easier, but it is possible to plan a trip like this in a shorter space of time.
The thing that surprised me the most was the price of the flights. Pessimistically, I had expected flights to cost an absolute fortune and be completely impractical but was pleasantly surprised by the prices I found. The tickets were cheaper than what I used to pay with Lufthansa and certainly cheaper than Finnair/JAL (JAL are still my favourite for service and a 2 bag allowance in economy class). The only catch is that I'd be trying another new airline, in this case Virgin Atlantic so I at least have an opportunity to review another airline.
The main things I needed to sort out were:

Beyond that, there wasn't much else to do.
Getting to the airport on Boxing Day required a particularly early start time of 02:00 (this is early even compared to previous trips), so it's safe to say I wasn't drinking much on Christmas day (at least my weight loss was being assisted). Ryan and I opted to share an airport taxi as the options were limited for boxing day (I might factor this in if I go back for new year again).
With Ryan's flight due to open baggage drop off at the same time mine was due to depart we took the opportunity to grab a coffee for an hour (after I'd dropped my bags off) before I went through to the gates. Fewer people appeared to be travelling as there were few queues at security, I probably managed to get through the whole process in less than half an hour. This left me with plenty of time to spare - waiting in airports is not something I particularly enjoy.


The flights were pretty uneventful, consisting of a short hop from Manchester to London Heathrow then on to Tokyo.
The first flight was from Manchester Terminal 3, which was new to me (having previously flown from T2). Terminal 2 is a little bit... small and there wasn't much to do. On the plus side it was quiet so the whole experience was quite pleasant. The only thing that particularly annoyed me was the idiotic passengers at the gate who insisted on talking over all the announcements. This does not help when the boarding rows are being announced! There isn't really much I can say about a 1 hour flight. I was offered a mini bacon sandwich and a cup of tea, can't complain.
The second flight was from Heathrow to Tokyo Narita. This is only the second time I've used Heathrow and it's been okay so far. Virgin Atlantic passengers with connections were able to take a shuttle bus to Terminal 3 and proceeded straight to the gates. That certainly sped things up! With over 3 hours to kill, I went in search of free charging stations (I really didn't think the S3 battery was going to stand up to being used on a 12 hour flight, even in flight safe mode) and grab a quick bite to eat (plain ham sandwiches from Boots - I like simple sandwiches, don't judge me!) 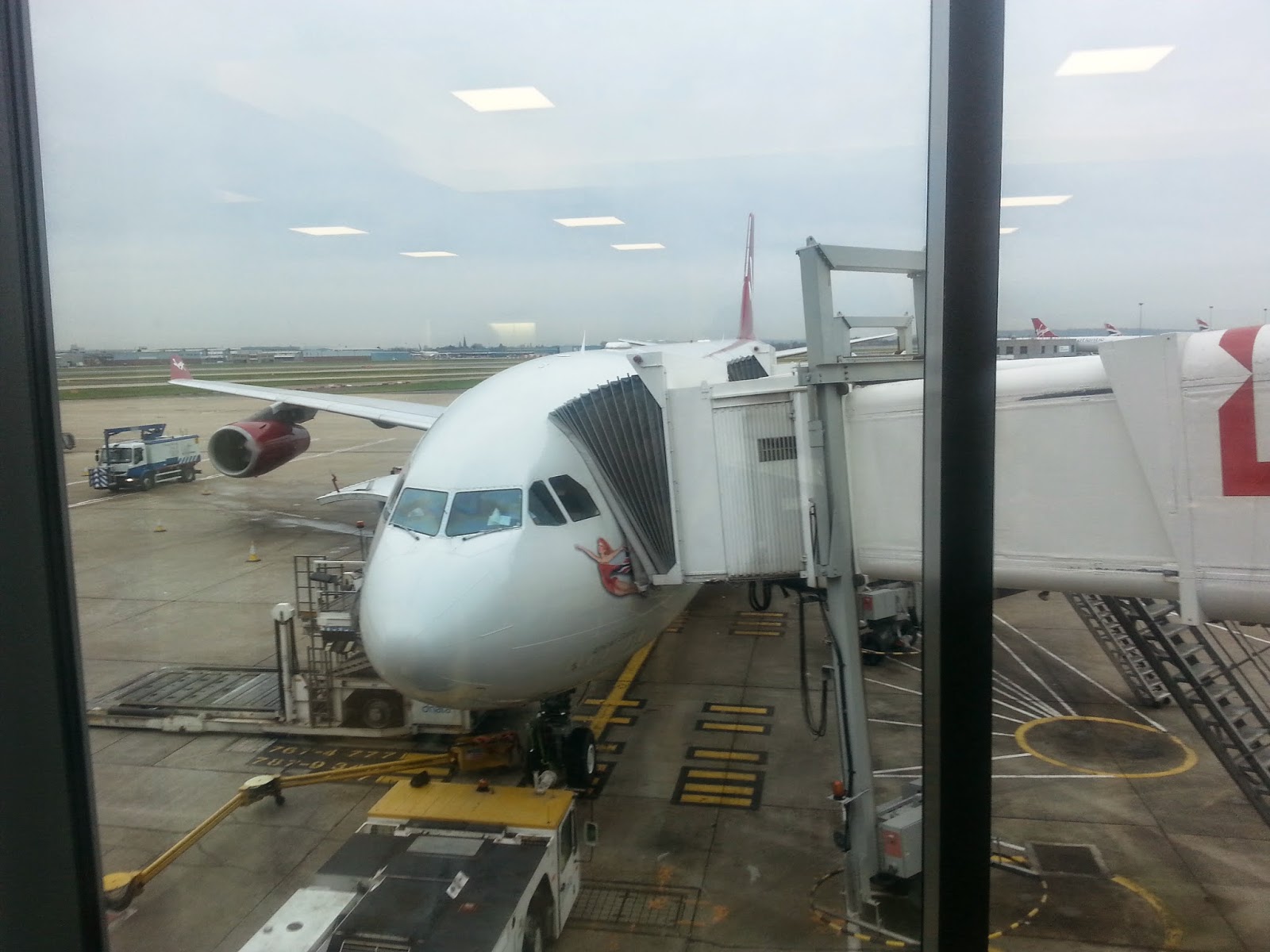 After boarding I soon saw that the cabin interior looked rather... dated and the in flight entertainment looked a little... outdated (I don't think they've updated the cabin for a pretty long time). I was left with the feeling that the 90's called and they wanted their television screens back (seriously! turning the brightness up and down felt like I was doing it on a 90's television set!). Other than that, couldn't really complain. Despite the rather outdated interiors (and entertainment system which I didn't use this time, so can't comment on the quality yet) the flight was pleasant enough. One thing I will say about the Virgin Atlantic cabin (at least on the A340-300) is that there seemed to be a reasonable amount of legroom. The Finnair flight I caught last time did feel a little more cramped and didn't seem to have much legroom, this was pretty good.
Food was okay, for lunch, a Christmas lunch was offered (opted for a Japanese curry instead) and a full English served up an hour before landing. Beer selection was limited, but that's hardly the end of the world.
During the flight we were notified by the flight attendants that the northern lights were visible. I couldn't sleep anyway so the brief glimpse of the northern lights did make for a nice little moment. Other than that, I spent most of the time simply trying to relax or listening to Big Finish audio plays. These really do help pass the time!
After landing and going through the standard malarkey of immigration, customs, baggage collection etc I set about picking up my phone and establishing contact with Ryan. At this point my partially careful planning started to let me down as I had received no message from Ryan. Having ordered a week in advance, I had my allocated number sent to my email address so I could let Ryan and Kyle know what my number would be.
For some reason, we thought that Ryan landed before me and would wait in the airport for an hour or two before we headed out to Kyle's. Turns out that Ryan hadn't landed yet and (according to the arrival boards) was due to land half an hour after I collected my phone, Timing worked out quite well so I simply waited at arrivals for Ryan in the area I knew all passengers leave through.
With contact established, we were ready to head out to see Kyle. This is a route I remember well from previous trips so I had no trouble getting us there.
Surprisingly, neither Ryan nor myself needed much rest so after a quick catch up we headed out to get some Tonkatsu for lunch (clearly Kyle and Ryan intend on me gaining weight during this holiday).
On the way back we explored a little more of Misaso including the Mega Donkeyhotey, a mega store selling just about anything and everything. 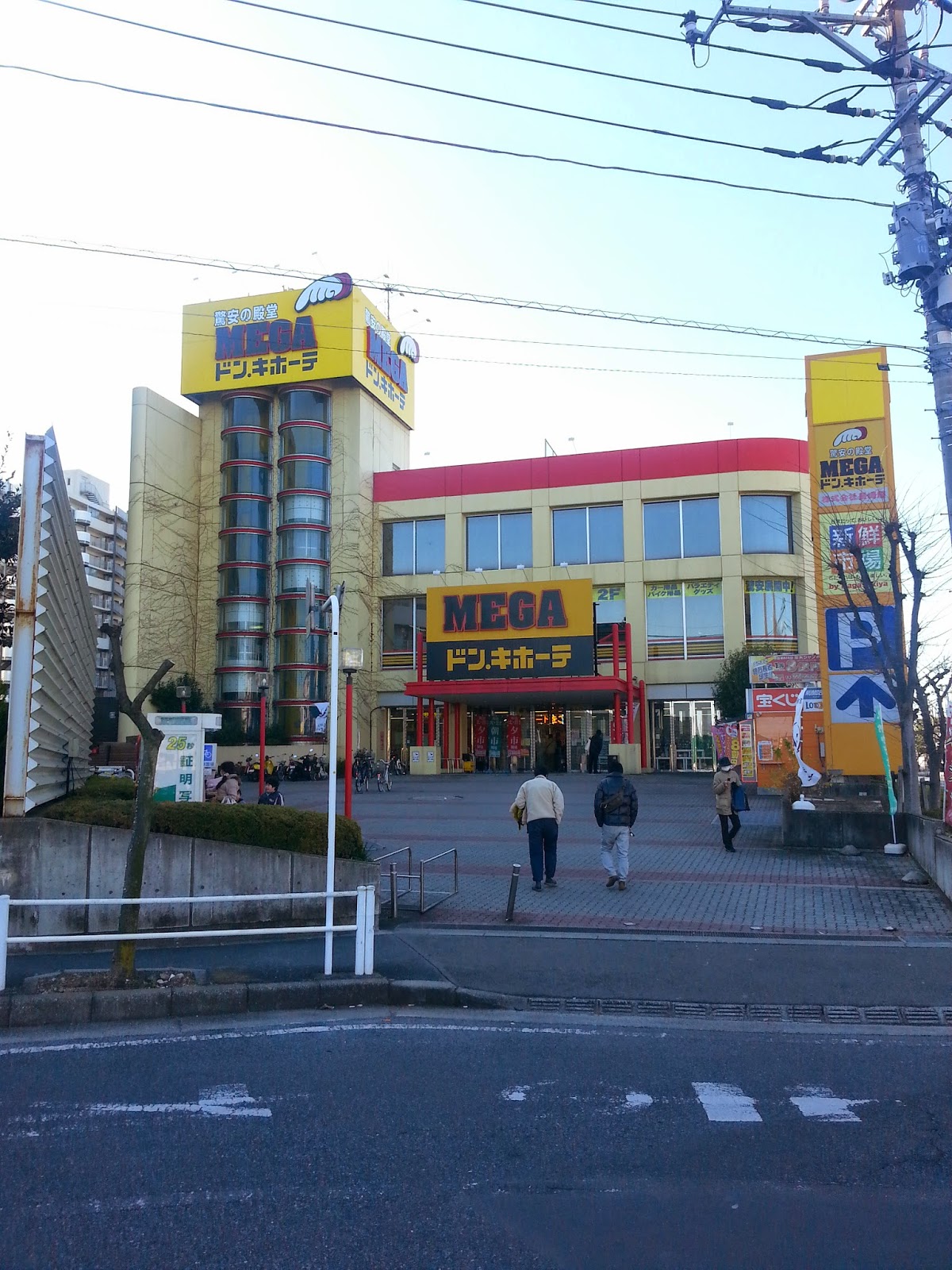 I have absolutely no idea why they chose that particular name for it, the only conclusion I can reach is "because it's Japan".
Also of note is that the Ikea building can be seen from most places in Misato. I just thought I'd mention this as we also browsed LaLaPort and LaLaPort is next to Ikea.
After a little more exploration (and walking off lunch) we headed back to the apartment for a little gaming (there wasn't much point going further afield on day 1). By this point we were getting close to dinner time.
The plan was to go out for yakiniku (meat grilled at your table). We were joined at the restaurant by Sato San and Kojima San. After some food and drink it was time to head back, by this point exhaustion and jet lag were starting to catch up with me.
On the way back we noticed some graffiti, not something that I'd normally expect to see. 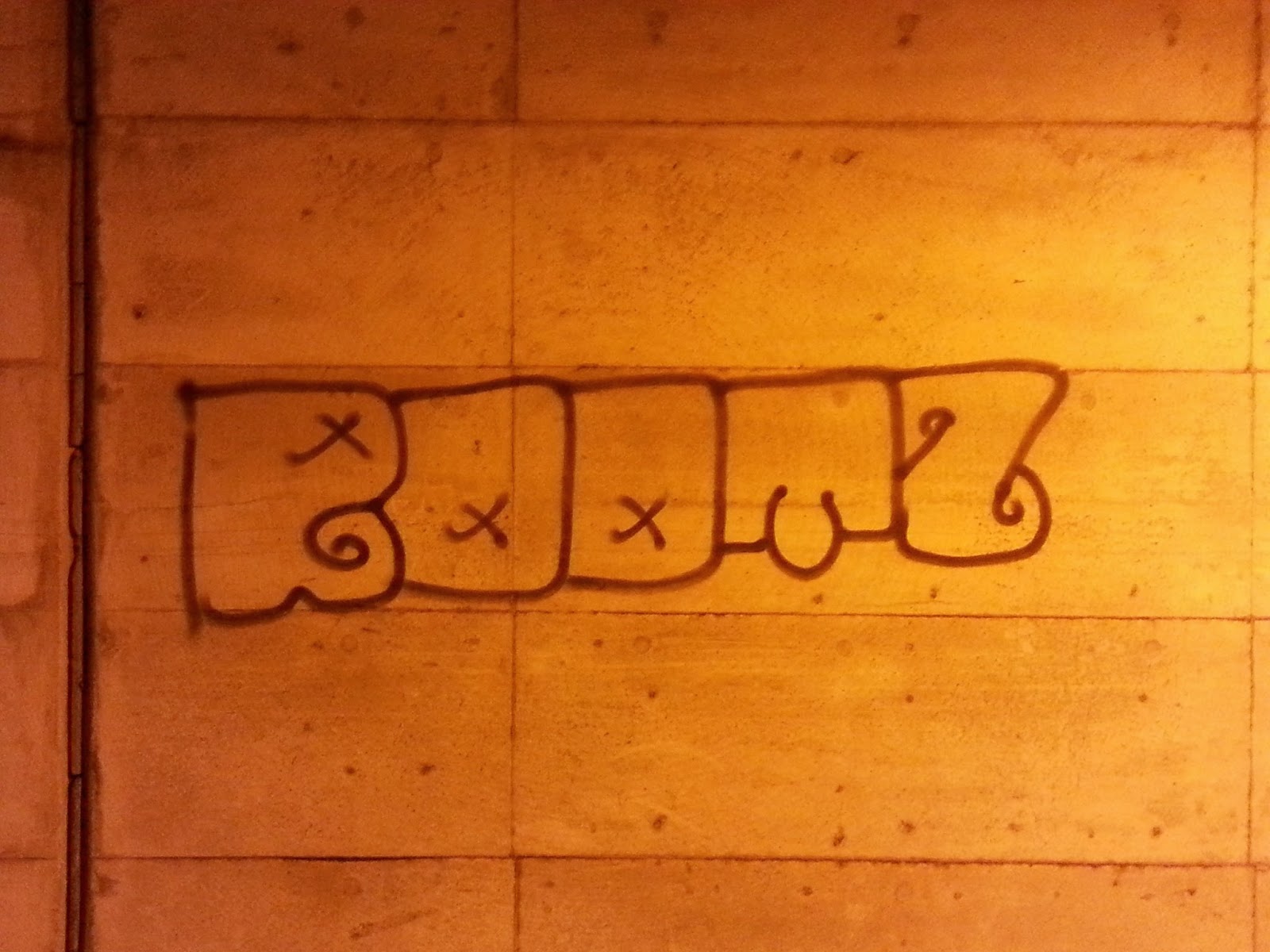 After getting back we decided to check Nintendo Street Pass and came to the conclusion that there are some very dull people out there. Health and safety information counts as a game? (then again I've seen a few people who's most recent game was System Settings) 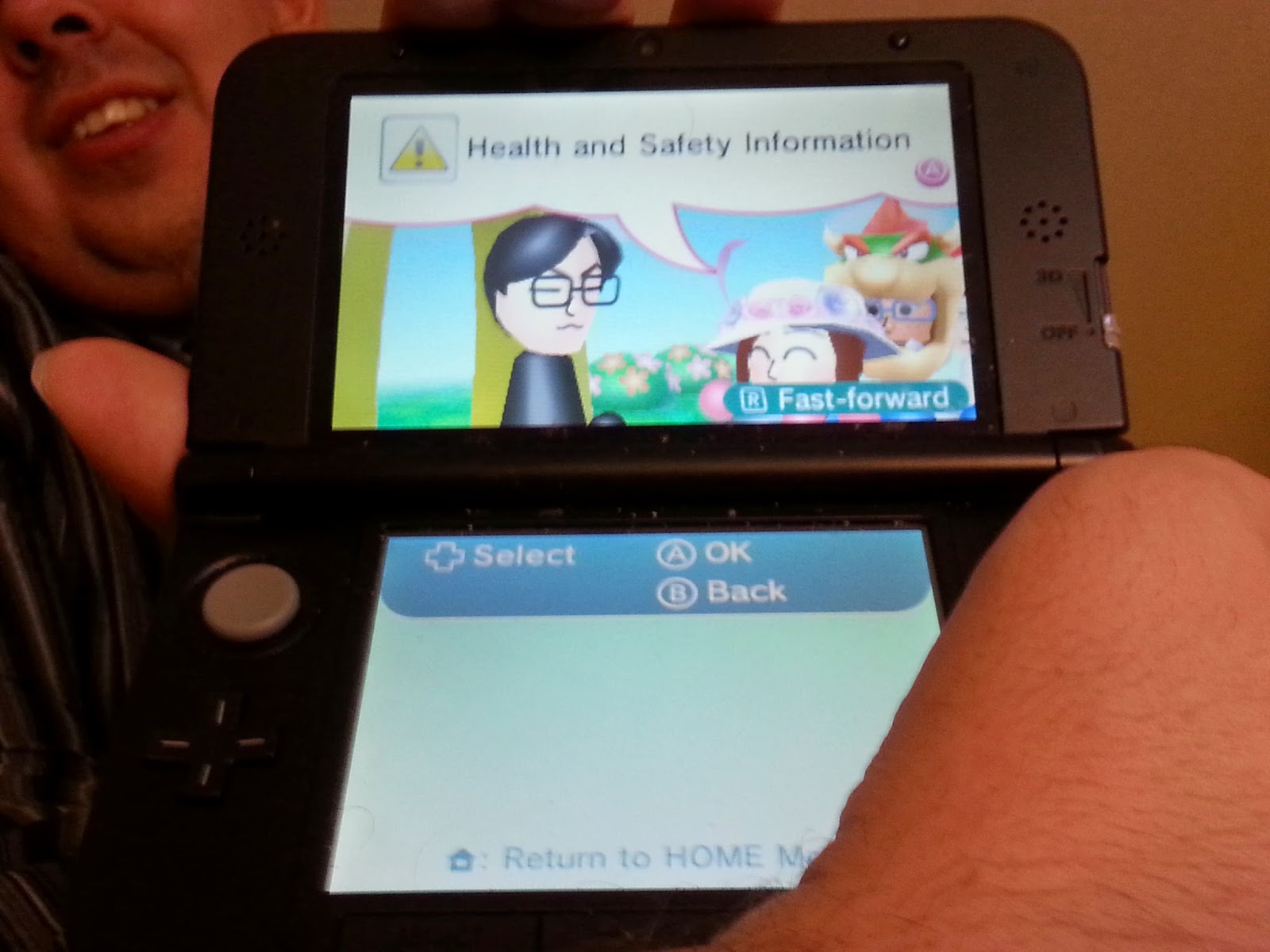 That's all for now folks. Day 2 coming up soon.