This story is entirely non fictitious, names have been changed to protect the (not so) innocent

After a good night's sleep Ryan and I felt refreshed and ready to take on the day (at least Ryan was, I resembled an extra in The Walking Dead). Being the only one of us who was fully awake, Ryan offered to venture out and bring us breakfast. Because Ryan and I were interested in trying more Japanese food he brought back... McDonalds (sometimes I wonder what goes on in that guys head).

Things in Akihabara had changed a little since I was last there (the promotions on the sides of buildings, the themes of arcades and other thjngs change to reflect the latest media) but the place can still be recognised as Akihabara.
One thing that did confuse (and slightly worry) me was the new promotional image from Sega, featuring a woman hugging sonic. I don't think there are words.

With shopping complete, we returned to the station to meet A San. This was my second time meeting A San (we met during my last trip) but for Ryan this was a first time introduction.


With introductions complete it was time for lunch. As we were in Akihabara, where else would we go other than a maid cafe? In my defence, the maid cafe wasn't my idea! (I suppose you could say they maid me go).
It was all pretty standard maid cafe fare (from what I've been told, don't get the wrong idea - it's not like I'm an expert in maid cafes or anything) with cute pictures being drawn on food/drink and playing a random game with the waitress.

I've come to the conclusion that the waitress took a particular dislike to me for two reasons: Firstly, we ran out of time so I didn't get to play a game (not the end of the world and not worth noting on its own). Secondly, when I provided my name for the loyalty card (before you ask, something they provide to everyone - I didn't specifically ask for it) they wrote profanities instead.
Next stop on the tour was Tokyo Station. This wasn't because there was anything in the centre of Tokyo that we wanted to see, we just went to see the station. Don't worry reader, this wasn't a train spotting trip, we were just interested in the architecture. Tokyo station (currently celebrating it's 100th anniversary) is designed in a European style of architecture which actually reminds me of Leeds.
Tokyo station was only a flying visit so it was soon time to move on to our next destination: Asakusa (and Sensou-Ji temple). Asakusa is easily one of my favourite locations in Tokyo, 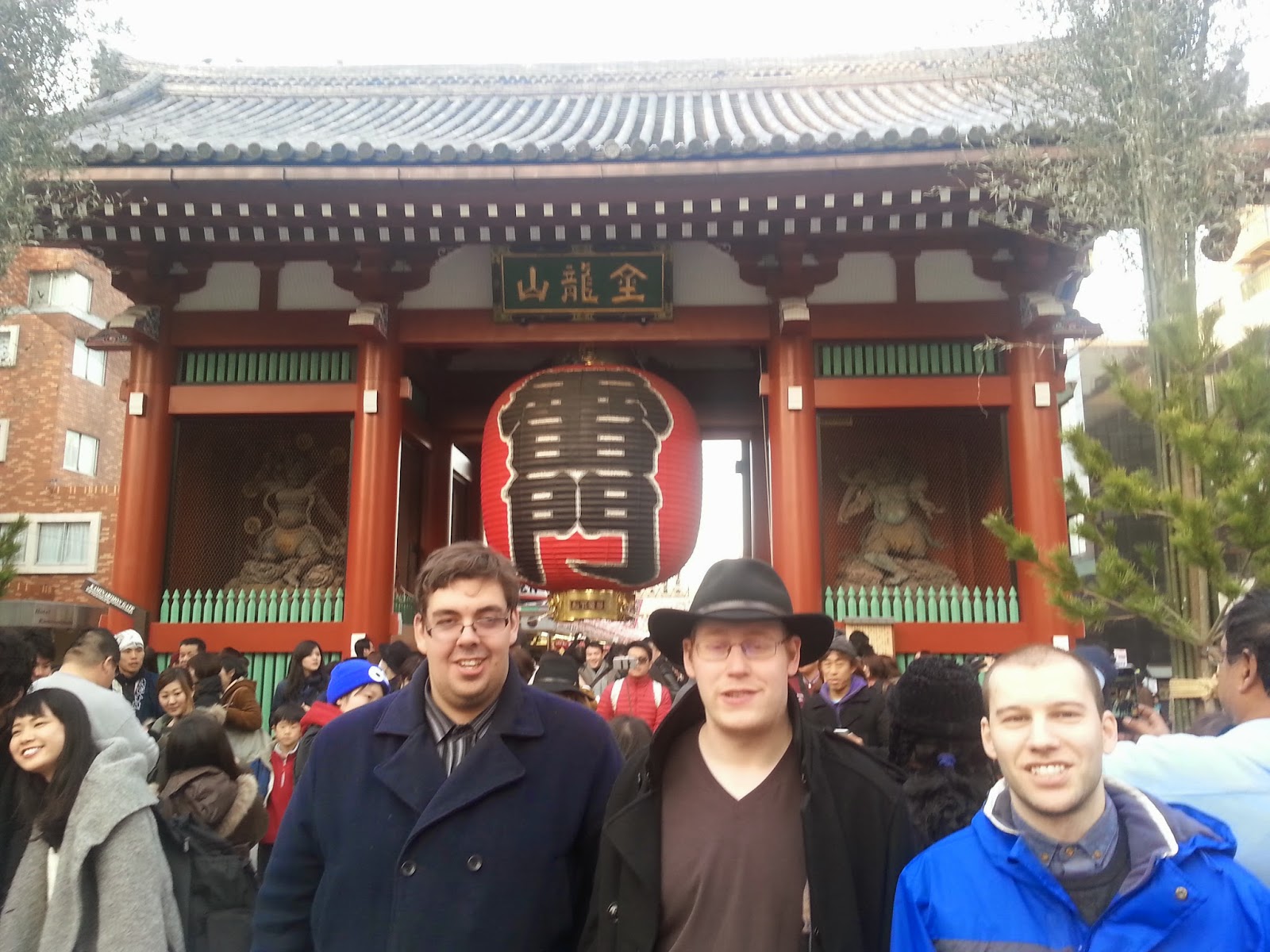 As always, the shopping district next to the temple was incredibly busy. The hustle and bustle add a certain charm to the area but I suggest caution if travelling in groups as it's very easy to become separated (this almost happened to us a few times).
A new year speciality available at the time was amazake, a sweet, spiced sake. As this is only available around new year, I strongly advise trying it if you have the chance.
By the time we finished in Asakusa it was almost time for dinner. Kyle had made reservations "The Lock Up", a horror themed restaurant I went to 2 years ago. One of the quirks of the restaurant is that one member of the group gets nominated to be handcuffed by a waitress, dressed as a police woman, when the group are taken to their booth (designed to look like a cell). We nominated Kyle for this and judging by the look on his face he appeared to be enjoying it.

Food and drink options have a horrific/monstrous/mad scientist theme to them. This and the setting all contributes to create a fun atmosphere. 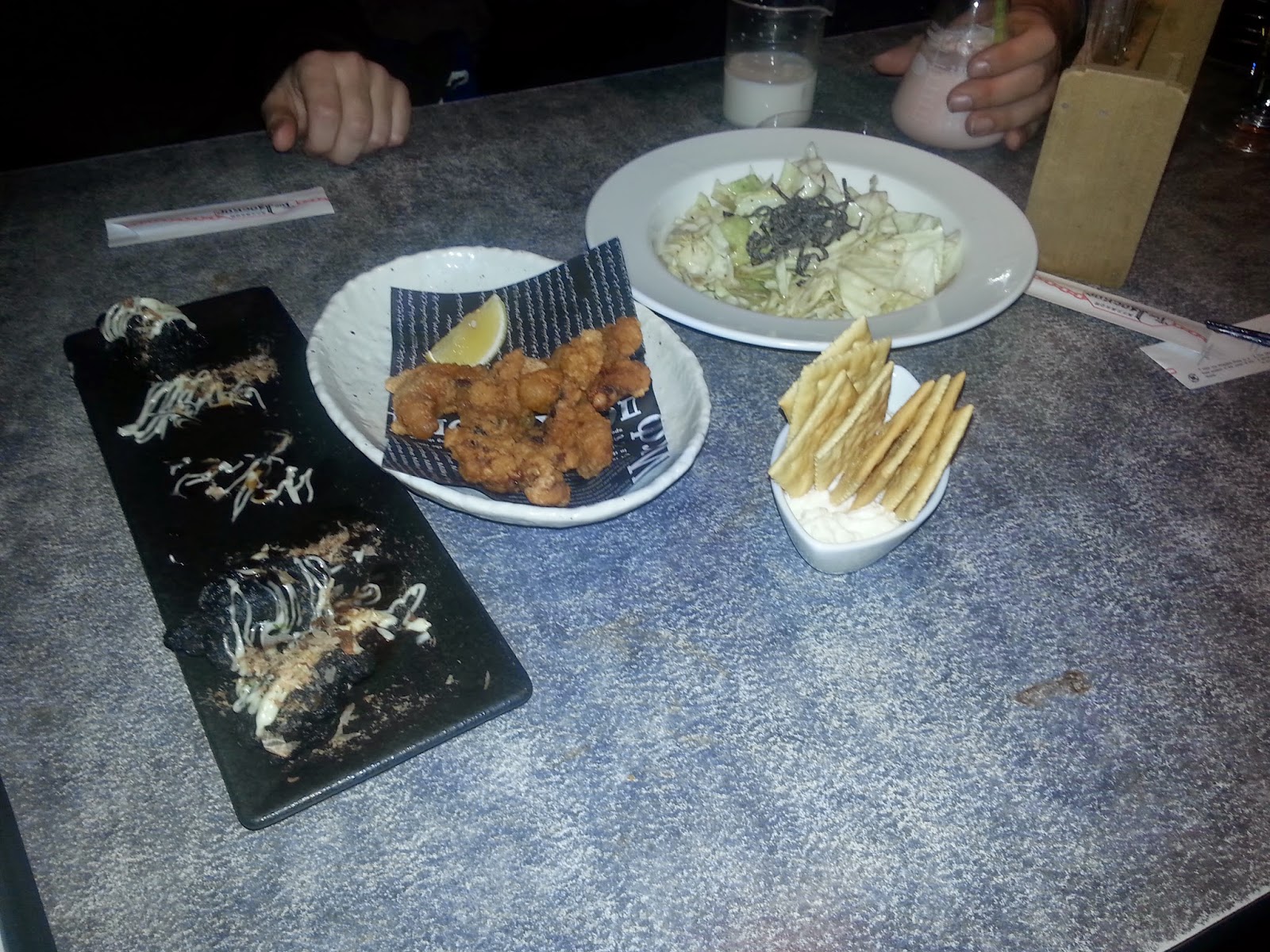 There are "Russian Roulette" dishes available. These consist of 4 dumplings, sushi rolls or a few other assorted dishes. 3 of the 4 are normal. 1 of them contains lots of wasabi or chilli. Be sure to have a 2litre jug of beer on standby for the loser of the game! We tried a few rounds and I soon started to feel guilty as A San lost 3 out of the 4 rounds we played (I lost round 4 and can confirm that these are not for the faint of heart!), As Kyle had tricked A San in to thinking that he had lost and the other 3 were safe, Kyle grudgingly accepted to try a round of Russian Roulette nibbles by himself as a forfeit. He soon learned the true meaning of pain when he found that the batch he tried were a little more powerful the the previous ones (maybe the chef was wondering why we had ordered 5 of them?).
As added entertainment, every so often the staff will stage a monster escape. A member of staff in a ghoulish costume will enter random booths and "shoot" the occupants (with a pop gun, the kind you get at western events as a kid) until the "monster" is shot by one of the waitresses. It may sound a little strange but it all made for a really fun evening.
Posted by Daniel Snowden at 07:47