By this point the year of 2014 was almost over, we had reached New Year’s Eve. I had been looking forward to this day in particular as this involved the first visit of the new year to a shrine/temple. Of course, before the bringing in the new year we did still have an entire day left of the previous year.
There had been much discussion and debate regarding exactly what we were going to do during the day and the evening. Initially we had intended to visit the Meiji Jingu to see in the New Year. In the end we decided that this wouldn't be a very good idea. There would have been no way to get back to Saitama until the morning and all the hotels in the area would be either fully booked or charging extortionate prices. This left sleeping in McDonalds as the only available option, I can’t say I found that to be a particularly appealing option.
Another option available to us was Minami Nagareyama. Kyle’s former colleague Sato Sensei suggested that we try the temple in her city (Minami Nagareyama), Kyle hadn't been to that temple before and Nagareyama is walkable from Misato. Because there was still time to decide exactly what to do in the evening we decided to go to Omiya for the day and make a decision about the evening later.
Of course, before going to Omiya there was a very important matter to attend to. To borrow the old Japanese proverb “Never go in to battle on an empty stomach”, we needed to grab a late breakfast/early lunch. LaLaPort was to be our venue, Ryan had never been to the food court in LaLaPort (Misato Kitchen) and with time running out this would be one of the last opportunities this trip.
I won’t go in to detail about Misato Kitchen, I've written about it before.
With our stomachs filled, it was time for battle (okay, not quite a battle although the crowded trains
can seem like a battlefield at times).
Parts of Omiya have something of a… reputation for certain… “Services” if you know what I mean.
The thing that seems a little odd is that these establishments share the same general area as many
of Omiya’s restaurants. So if you’re exploring Omiya try not to be shocked if you stumble across such
establishments when looking for food. Poor Ryan got the shock of his life upon seeing the “Omiya
Girls Academy”.
Given that we had already eaten and had no interest in frequenting the seedier side of Omiya we had no reason to stay in that area so we moved on to the shrine visit.
As always, we managed to get a little lost when navigating our way to the shrine. Leading up to the shrine there is a long, wooded, path. While this can be bypassed, I recommend walking along it as
it’s a nice walk and if you’re visiting in summer it provides a nice little bit of shade. The difficulty in locating it is that we needed to traverse a small residential area. It’s pretty much a matter of much whether you find the side road you need of a cul-de-sac.
Upon arriving at the shrine we found that most of the food stalls had already been set up but there were still a lot of preparations being made. Besides stalls offering Daruma and other assorted trinkets there are also stalls offering a wide variety of snacks including ones which are only available at new year.
Kyle, with his almost inhuman appetite, sampled as many different foods as possible. I, on the other hand, was still largely full from the fried noodles (I can’t remember off the top of my head whether it was Yaki Soba or Yaki Udon) so I was a little more limited in what I could try.
One of the foods I did try was a rather unusual New Year speciality – chocolate covered banana. I admit, it sounds like a crazy combination that really shouldn't work but it actually works pretty well. The stall selling them had a fun system for ordering, the vendor challenges you to rock paper scissors. If you lose then the price you pay will get you 1 banana. If you win then the price gets you two bananas. Kyle lost the game so he bought one for himself. I was fortunate and won so I gave a banana to Ryan (that sounded better in my head!).
Beyond that I sampled a little bit of some Yakiniku that Kyle bought and tried some Taiyaki. Ryan opted to sample some Tako (octopus) on a stick. You see these a lot in anime. By this point we had reached decision time. One option available to us was to stay in Omiya and bring in the new year at the shrine there. We would still be able to make it back to Saitama in time (just about) and the shrine would be busy but not as busy as Meiji. I wasn't looking forward to the crowded trains on the way back so we opted for the temple in Minami Nagareyama.
Kyle phoned Sato Sensei to confirm a time to meet, we then found that there was a twist to the plan. Besides going to the temple with her she had also invited us to her home for some Osechi Ryouri (New Year food). Bearing this in mind, we stopped off on the way back to buy a gift (it is tradition in Japan that you bring someone a gift if they invite you to their home) and some local sake to bring with us.
From Misato, Nagareyama is just across the river which forms part of the boundary between Saitama Ken (prefecture) and Chiba Ken. By crossing the bridge, your city tax increases by 30%. Nagareyama is a nice city but Misato is comfortable and not particularly expensive. 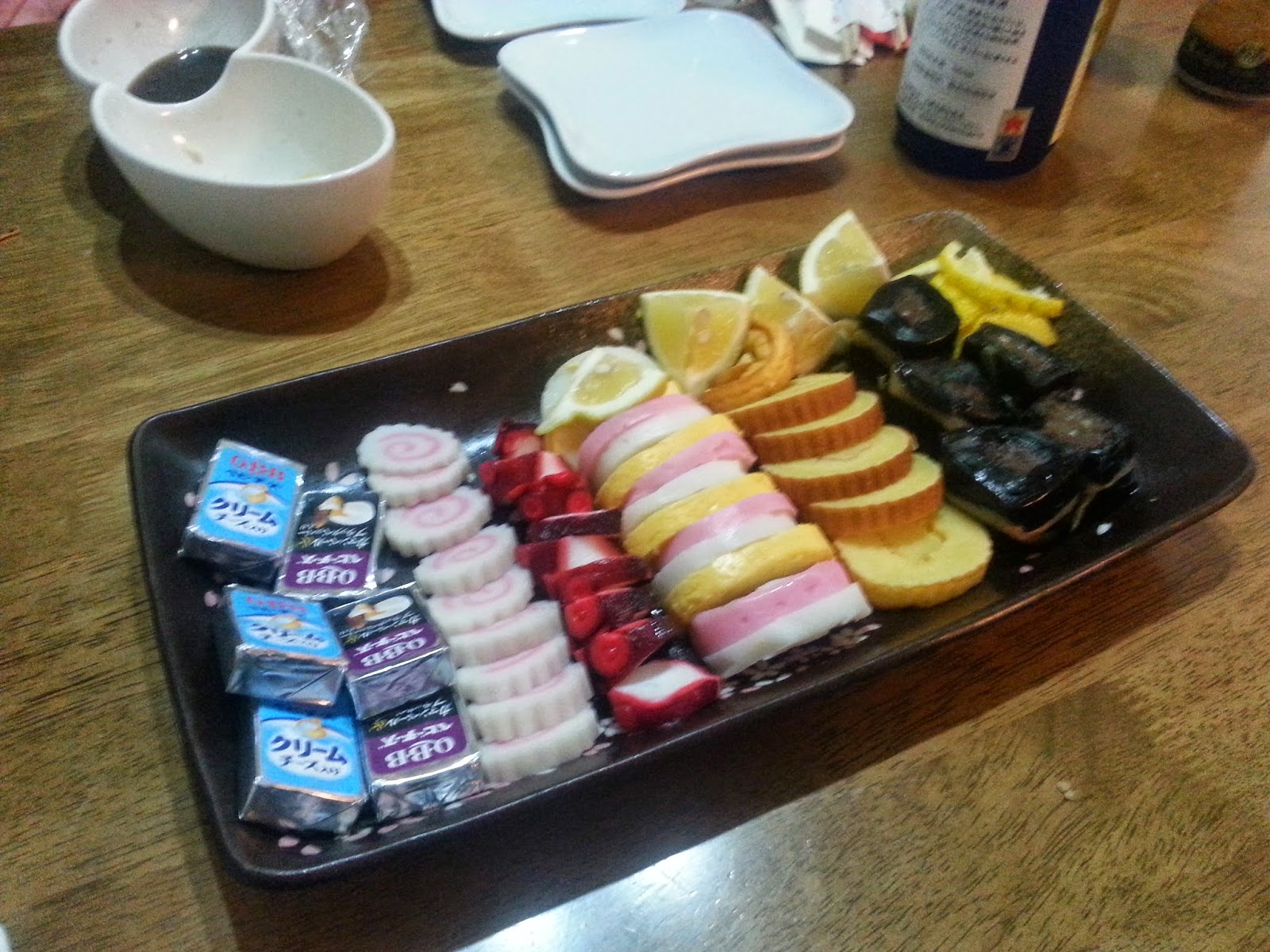 While waiting for midnight we enjoyed beer, sake and osechi ryori while chatting and watching the New Years Eve programming on NHK. Think of it as being a little bit like the New Year programme in the UK with Jools Holland. That’s probably the closest thing I can think of. There’s a contest between various singers and music groups (AKB48 win every year, so there’s no accounting for taste) and various interviews and light entertainment.
As we entered the year of the sheep it was time to go to the temple. Even though it’s a small, local, temple it was still very busy. 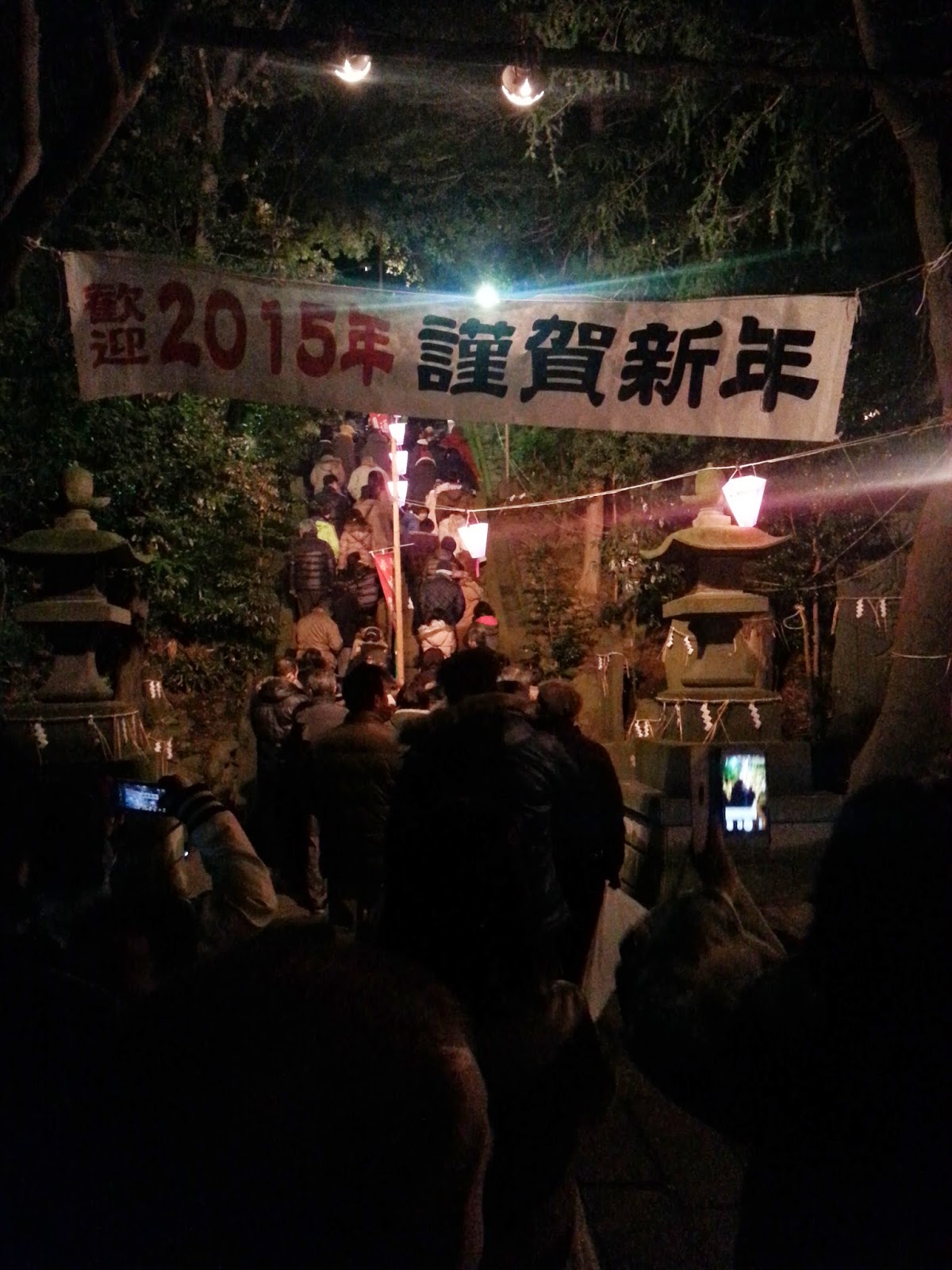 One slight error in judgement was picking up some more sake to drink at Kyle’s. A gentleman whom Ryan and I got talking to at the 7-11 recommended a particular bottle from his home prefecture of Akita. Although nice, it was also rather potent. Given that Ryan and I managed to finish off the entire bottle between the two of us… it’s hangover time!
Posted by Daniel Snowden at 13:37