Well reader, it’s that time once again – the annual trip to Japan. I suspect this may be a little more than annual. With the recent (last minute) New Year trip it’s sometimes twice a year (I’m really not going to be able to do this for much longer!).
As with previous trips, this was booked almost a year ago. It’s sometimes said that you should start planning your next holiday as soon as you get back from your last one, so this is no exception. There are some reunions that I'm looking forward to this trip: Yoshi (the teaching assistant from University in one of my previous years of study), Masami (one of the Japanese students from the University and a member of the study group), Graham (who we met in Nikko) and several of Kyle’s friends in Japan. The trip is under way, so here’s how the day has been going on:
The day started off in Manchester Airport. Okay, that’s not quite true. The day started off at home but I think I’ll skip over the details of waking up and getting washed and dressed. Believe me, a detailed description of what I'm like in the morning (both appearance and temperament) is something nobody should have to read.
Anyway, back to Manchester. The first stop on my epic journey was Helsinki. I’d travelled a few different routes by this trip and found that travelling via Helsinki was a particularly convenient option. It’s no surprise that in their advertising Finnair promote themselves as Europe’s “Gateway to Asia”. There isn't much more I can say about Manchester. The queues at Departures were much longer than last time (flying on Boxing Day has its advantages!) but the queue moved pretty quickly so this wasn't a problem. Seasoned traveller that I am, going through security was a pretty quick process. This left me with over an hour and a half before boarding so it was time to grab a cup of tea and start some writing. The journey to Helsinki was pretty uneventful. The only noteworthy thing about that leg was that we saw the bags being unloaded before we exited the plane at Helsinki – a few of us laughed when the “bagsmashers” (baggage handlers) lived up to their name. It became a little less amusing when I recognised on of my bags being casually tossed around.
Upon my arrival to Helsinki, however, I was disappointed to find that the restaurant that I went to last year had been replaced with a Burger King. That, I did not consider to be an improvement. As luck would have it, a new place had popped up nearby (at least I think it was new, I don’t remember seeing it last year) called “Two Tigers”. Sushi and noodles were their speciality so I thought it worth a try. Besides, when in Rome… Or on the way to Rome? Anyway, after a bowl of Korean style ramen (the Korean twist being the addition of kimchi) it was almost time for boarding (layover was only 2 hours this time – Helsinki is great for fast transfers). 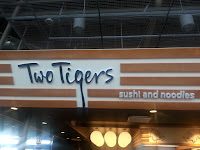 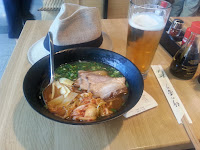 For the flight to Tokyo I had received a few pleasant surprises. When making arrangements with Finnair to bring a second suitcase, I threw caution to the wind and payed the extra €50 for an “Economy Comfort” seat. This offered an extra ~5” of legroom, I remembered from last year that the legroom wasn't fantastic so an upgrade would be useful. The seat I selected was a bulkhead seat so I wouldn't have a reclining seat in front of me, the trade off being that my bag would have to be stowed in the overhead locker for take off and landing. It turned out that the bulkhead seats in Economy Comfort have an insane amount of legroom – even my toes won’t reach the bulkhead! (downside is that I needed to take off my seatbelt to get to the storage pouch – a small price to pay). Furthermore, the extras included a small amenity kit and some noise cancelling headphones in place of the regular kind. The headphones seemed to be good quality and were of an over ear design that completely covers the ears. While not 100% effective (I’m not sure if any are), they blocked out enough background noise. I never used the in flight entertainment system during the flight (had a laptop full of anime and a power socket) but found myself using the headphones to block out noise when resting. Alas, my ability to sleep in an economy class seat is limited at best but this was a pretty comfortable journey.
After arriving in Tokyo, it was time for the holiday to begin!
Posted by Daniel Snowden at 02:38