After going over familiar terrain yesterday, it was time to visit somewhere new. This time round it was Kashiwa in Chiba prefecture.
https://en.wikipedia.org/wiki/Kashiwa
Kashiwa city has a bustling shopping district, in fact, the train station is built in to a large shopping mall. This did present us with a challenge when we were trying to navigate the area. There was a North exit and a South exit to the station, it did take a few surveys of the areas surrounding the exit to determine the area Kyle was familiar with.
Once we had familiarized ourselves with the area we started a little exploration. We came across an interesting looking shrine. Upon further investigation (namely when I was looking at expanding my omomori collection) we found an “out to lunch” sign. This we took to be a sign from the kami that we, ourselves, should get lunch. This might also have had something to do with my stomach producing the kind of rumbles that register on earthquake monitoring equipment. 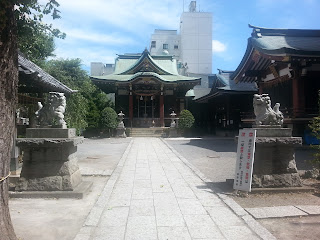 Kyle had clearly recovered from the year that I subjected him to the “ramen diet” as his suggestion was ramen. In this instance it was a type of ramen that I had not previously tried: cold ramen. This is a summer dish, sometimes visiting Japan in one of its hottest months has its advantages. The say it’s served can vary. Sometimes it’s served as a typical ramen (all in one bowl), in this restaurant it was served in two bowls. The soup base was in one bowl while the noodles and toppings were in the second. Dipping the rice/toppings in the soup was an interesting change and overall was something I’d certainly have again. After trying it I could understand the popularity of cold ramen and the way it made for a refreshing dish in summer. 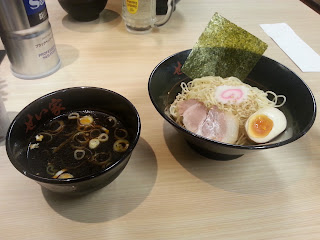 As to be expected, there was a fairly large amount of window shopping (partially due to the large amount of shopping I had previously done in Akihabara). There were a wide variety of shops, so it’s safe to say that we were both kept on our feet for quite a while. Because Kyle was not feeling 100% I was particularly appreciative of the effort he was going to.
As luck would have it, we stumbled across the “chibi” dark magician girl figure I saw last summer but didn’t buy. I looked all over at new year but to no avail. Recognising that I would probably not have this opportunity again I leaped at the chance to buy it. Somehow, I think my suitcases will be a little crowded!

After plenty of browsing and walking the equivalent of a marathon, it was time to head back to Misato. Upon our return to Misato, Kyle offered to buy me dinner at Burger King as we wouldn’t be able to go out to a restaurant for dinner that evening. This seemed like an unusually generous gesture so I was a little suspicious. My suspicions were confirmed when Kyle returned from the counter, with a particularly evil grin on his face! He had ordered me aka samauri burgers. For those who are not familiar with these, here’s a link:
http://www.japantimes.co.jp/life/2015/06/17/food/burger-king-unveils-red-colored-burgers/#.Vcti5_lVikp
These burgers feature a sauce based on Chinese chilli bean paste and the red buns are marinaded in chilli. I iwas warned by Kyle that these were pretty powerful, in fact, he could only manage a few bites last time he tried one and it played hell with his… digestive system. He had presented me with 2, the chicken version and the beef version - This was his revenge!

Being a brave Yorkshireman who lives for curry, I had no choice but to rise to the occasion.
With trepidation, I took my first bite. So far so good, but I’d eaten enough curries to know that this could be a trap. I’d had plenty of curries that seemed mild at first but took a few seconds for the heat to register – I call this the “afterburner”. A few more bites and I’d managed to eat half the beef burger. Other than some heat from the sauce and from the bun, it all seemed okay. In fact, it was rather nice. Kyle could only look on with horror as I finished the beef burger and moved on to the chicken burger. Kyle’s revenge had turned in to his humiliation, it seems he’s lost his ability to handle chilli. From now on, he will be known as 猫舌 (cat tongue) – for the inability to handle hot/spicy food.


My victory sure was a good way to round off the day. Until next time!
Posted by Daniel Snowden at 07:37