Our plan for the day was to meet with Mizushima San. I'd met Mizu last year when he showed us around Yokohama, so I was looking forward to seeing him again. Kyle and I needed to think of somewhere nice to take Mizu, thinking of his interests, Kyle suggested Nakano. This also had the advantage of us being familiar with the area so we would be less likely to make fools of ourselves. Well, that was the theory anyway.
For someone who claims to have grown out of anime, to suggest Nakano Broadway no less, I started to wonder if Kyle was just putting on an act.
Anyway, we'd arranged to meet Mizu outside Minami-Nagareyama (南流山) station. By the time we were set to meet it would have been lunchtime. Assuming that Mizu already had lunch, we arrived early and set about finding something to eat at the konbini (コンビに - convenience store) near the station. It soon became apparent that we had made a significant miscalculation. The rush of morning commuters had ended so the shelves had been raided. The situation reminded me of the old story of Old Mother Hubbard. Only the smallest selection of sandwiches, rolls and onigiri (おにぎり- rice balls) remained. Picking over the remains, I found a BLT. I was a little disappointed that where were no katsu-sando (カツサンド - katsu sandwich) left, but in hindsight, this was probably better for my waistline.
Kyle and I's prior recon bore fruit early on. We had already worked out that taking the Tskuba Express to Akihabara would provide an easier (albeit slightly more costly) route.
Upon our arrival to Nakano, we proceeded to check out some of the second-hand games shops in the arcade leading up to Broadway. We still had a few, elusive, Yu-Gi-Oh! games to locate. Well, that was after Kyle tried to convince me to visit some of the seedier establishments near the station. Sometimes I worry about what goes on in that guy's head.
Our search for games proved futile so we headed over to Broadway. On the way, I noticed something unusual (that we somehow missed the previous day) - a shop named "Piccadilly Circus". That was an... interesting one to explain to Mizu. 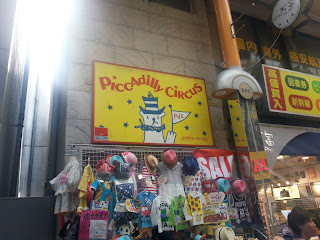 I won't go in to too much detail about the various shops (considering this was a key part of the previous update). One noteworthy example was that Kyle thought it a good idea (for some reason) to suggest a crossplay shop. Exactly why Kyle wants me to do... that, I'd rather not know (once again, I worry about exactly what goes on in his head).
After browsing three floors of anime merchandise it was time to move on from Broadway. We debated a few possibilities, including a number of other places in Nakano, but Mizu suggested trying Kichijouji instead.
This proved to be a particularly good recommendation. This was hardly surprising as Mizu had previously introduced us to the street food of Yokohama Chinatown. After leaving the station, we explored a fancy looking shopping street which also had a number of restaurants. The street led up to a lake. As this was a large lake in a popular area, it was hardly surprising that there was a boat house. Naturally, we thought it would be nice to go out on a boat. 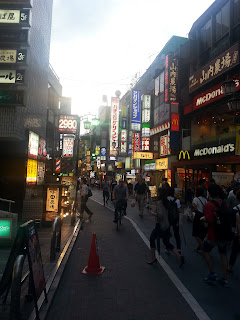 In hindsight, hiring a row boat for the three of us was probably not the best idea we ever had. Even with the best planning and help from the staff members, we encountered some "weight displacement" issues.
Mizu was first in the boat, he sat in the middle as he had more experience with rowing and wanted to demonstrate his skills. Next in was Kyle, taking the rear seat. At that point, the scene that unfolded in front of me was vaguely reminiscent of the Titanic. As Kyle stepped in to the boat, I noticed the bow start to lift out of the water. My unease grew (as did that of the staff) as the bow took a worryingly steep angle. The level of the stern in the water did not look encouraging either.
How the member of staff managed to help Kyle out of the boat without capsizing it is a complete mystery to me! At this point Kyle conceded defeat and suggested that Mizu and I take a (2 person) peddle boat instead.
Continuing the comparisons with the Titanic, Mizu (for some reason) allowed me to steer. After 2 collisions and getting the boat stuck under an overhanging branch, I began to realize that a nautical career would not be the best thing for me and becoming a developer was the right choice. After all, if my code crashes then it's no big deal. Crashing a ship, on the other hand...
Mizu's brush with death seemed to give him quite the appetite so a bite to eat was next on the agenda. Among the many options available to us, there was kushi katsu. I hadn't tried that before so I was keen to give it a go, 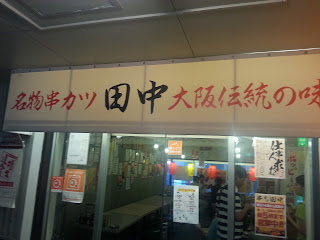 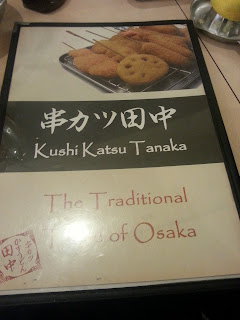 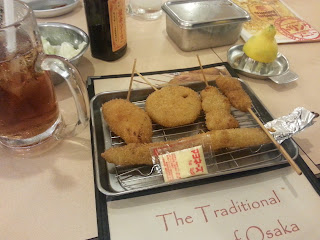 The best way to describe Kushi Katsu is various types of katsu with a specific dipping sauce. The katsu included meat, vegetables (such as lotus root) and even egg.
After eating, it was time for us to indulge in our hobby of brutally murdering popular music.By this, I mean that Kyle suggested we go to Karaoke. Even though he knows how awful I sound, he suggests it anyway. Clearly, he is an acoustic masochist.
I'll spare the (horrific) details but I managed to butcher Queen, Pink Floyd and Foreigner - I really must stop singing songs that I like, I'm ruining them!
That wraps up another day. Next time: Nikko, off to the countryside.
Posted by Daniel Snowden at 09:32