There wasn’t much to write about for day 1, Kyle had recently gotten back from a trip and jetlag started to hit me just after lunch. Jetlag can be a sneaky beast, I initially felt okay in the morning when I arrived at Kyle’s. As usual, we needed no greetings and picked up where we left off last time. Not long after, we got a call from Yamashita San who was planning on stopping by.
Unfortunately, Yamashita wasn’t able to stay for long but was able to stop by for a quick chat and work out a few ideas for things to do in the following week.
Later on, just before lunch, we needed to venture out to pick up some fresh bedding from the homeware store at LaLaPort. Having learned from previous experience, I made sure to apply sun block beforehand (given how pale I generally am).
After making our purchases it was time to get lunch. Because we were already in LaLaPort, the food court was the obvious choice (that being said, I still haven’t tried station kitchen yet). Kyle opted for some strange rice dish with an egg on it. I opted for ramen, because I haven’t had the real thing in quite a long time!
Things were pretty quiet after we got back so Kyle decided to demonstrate the new game he’s recently started playing: Splatoon
The idea is simple, the players are evolved squid who “mark” their territory with ink. Unfortunately, that’s not exactly what it looks like:
After a playing a little Splatoon, the jetlag started to kick in. Kyle was still feeling a little worn down so we decided to rest for a little bit. Like I say, this was a pretty slow day.
Later that evening, it was time to go out for food. Kyle’s recommendation was yakiniku (焼肉). I was introduced to yakiniku last summer and developed quite a liking for it, so I was happy with this suggestion.
I should point out that where Kyle and I are involved, yakiniku can be quite a dangerous business. I have virtually no hand-eye coordination and Kyle can’t see particularly well – so not a good combination. When ordering drinks, my improved katakana started to come in handy. We had a choice between the blind man and the man with no coordination to put the meat on the charcoal. With hindsight, wearing a long sleeved T-Shirt was probably not my best idea. Fortunately I (somehow) managed to avoid burning myself or the food I guess that makes it a good evening.
On the way back to the apartment I came across 2 interesting drinks. The first is a new version of “Grand Hop”, based on India Pale Ale. It was okay, maybe a first step. Hopefully Kirin will experiment with a few more ale styles. 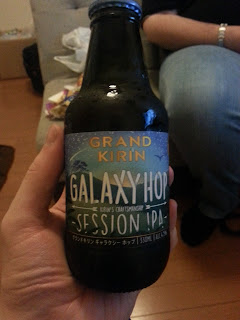