At the start of day 2, Kyle had a few things to attend to so it seemed like a good opportunity to make the trip to Akihabara. The visit to Akihabara is something I do once each trip and it’s interesting to see the changes in the area. 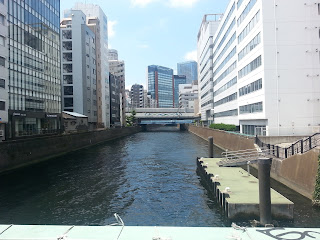 While I was out, I was hoping that I’d get time to stop by Kanda while I was on my way out and visit the Kanda Myojin – a shrine in the area that I saw on my very first trip to Japan. For anyone who wants to read a little more about that excursion, Kyle and I’s blog entry is available here:
https://seriouslyshinto.wordpress.com/2012/02/17/technology-and-gods-the-city-of-akihabara/

So, back to Akihabara. 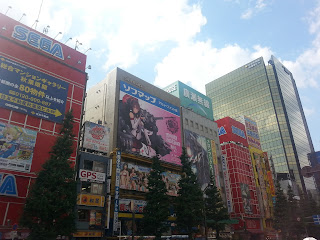 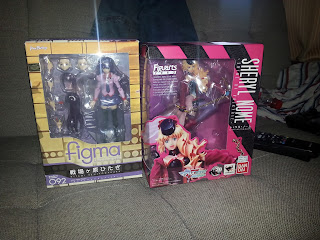 As always, I was looking for some new figures to add to the collection. Stopping by the usual shop, I had a little browse around. A little browse turned in to an extended period of agonizing over which figures to buy. It didn’t take me long to narrow down my choices to some Macross Frontier and Bakemonogatari figures. By far the biggest problem was that there were too many to choose from, the second and third problems were working out which combinations I could budget for and what I could actually carry back with me (I did see a huge Sheryl Nome figure – that would just about fit in my large suitcase but without leaving room for much else!)
After much to-ing and fro-ing I settled on a Senjogahara Hitagi (Bakemonogatari) Figma and a Sheryl Nome (Macross Frontier) figure. 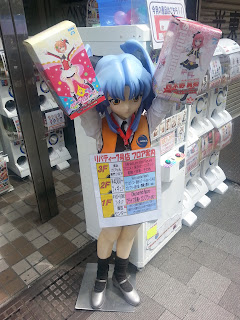 While paying for the second figure (with these shops it’s common to pay for purchases on each floor) I noticed that they now took cards (I didn’t remember this before) so thought I’d try a little experiment and pay for it on the Amex card. I’d already notified my card provider that I’d be in Japan at this point so in theory it should work. Sure enough, the transaction went through without any issue. I was a little surprised as a travel guide I’d read a few years ago warned that cards aren’t widely accepted in Japan and foreign issues cards were not likely to be accepted. Over the past 4 years I’ve seen more and more card machines appearing and it seems credit card use is on the rise (in fact, the previous day I noticed someone paying at a restaurant with a Japan Airlines frequent flyer credit card) and foreign cards are more widely accepted than before (come to think about it, when buying a Shinkansen ticket a few years ago, I was asked if I wanted to pay by card).
After making my purchases it was time to grab a (slightly late) lunch. While looking around for restaurants, I stumbled across a rather unusual form of promotion. Samples being held up by a mannequin of Ruri from the series Nadesico (old 90’s anime series)

The eventual choice was a Tempura restaurant on the main street. The restaurant was next to the Komori Soba I had visited a few years earlier. From memory, the Komori Soba had nice curry noodles but I’d already had noodles recently so fancied Tempura as a change.


This particular restaurant used an upgraded version of the pre-ordering machines I’d seen before. The idea is that you select and pay for your order and the machine provides a token which you provide to the staff. The upgraded version here used a touchscreen in place of the conventional “push button”. What made this really useful was the inclusion of an English language option. With a sizable queue behind me (always a good sign – clearly a popular place) I decided the safest option would be to use the English option rather than take a while with translating the on screen options (and annoying the hungry people behind me). From the many available options I chose a set meal. This basically meant that I also got rice and miso soup – miso soup is one of the things I miss whenever I get back to England.
In the evening our plan was to meet with Abe San (Kyle’s dentist and a keen student of English). We met Abe after he had finished work and proceeded Minami Koshigaya for dinner and drinks. There were a variety of bars, restaurants and eateries in the area. Kyle’s suggestion was an outdoor bar we had been to on a previous occasion. That particular bar served outstanding yakitori last time we were there. Unfortunately we had made a slight miscalculation, we were going out on a Sunday and was the day that the bar was closed. Unperturbed by our initial setback, we once again deferred to Kyle’s extensive knowledge of the food available in Koshigaya. In the end, we opted for a European style restaurant called Pangea.
On previous visits I’d stuck to Japanese food so it was interesting to try the Japanese take on European style dishes. Because this was my first time (and we have a tendency to do this anyway), the three of us picked some dishes “for the table” so we could all try a little. The food was enjoyable, some of the dishes seemed familiar (ones I recognise) but with hints of Japanese flavourings, the “fusion” worked well. The one disk that Kyle couldn’t resist ordering was grilled lamb. Lamb being the meat he can’t get regularly. I’m partial to a little bit of Spring lamb and even I was impressed with the lightly spiced lamb served up to us.
In addition, Pangea has a wide selection of international beers. Rather than focus on the beers, Abe recommended that I try out the Shochu (焼酎). Some people drink it “neat”, I opted for trying it with a mixer (being the Japanese equivalent of vodka, this seemed like a wise approach).
With a sufficient amount of food in our bellies, Abe recommended spending a little time at Karaoke before heading back. Clearly Kyle had never told Abe the horror stories of my singing! He had, on the other hand, told me about Abe’s amazing singing voice.
At Karaoke, I (for some reason) let Kyle pick my first song. This was a decision that I immediately regretted, for Kyle had chosen none other than Barbie Girl (I can tell you, that gave me flashbacks to the 90’s!). As I was made to endure the humiliation of singing that song, I made sure to subject Kyle and Abe to the most unemotional (with hints of anger and bitterness on top of that) singing voice ever hears. Imagine if Will Self released an album – this is what that would have sounded like! Some of the other contributions I ended up making were “Fat Bottomed Girls”
Abe amazed us with various renditions through from ABB48 through to various anime songs. It’s safe to say that his singing more than made up for my crimes against music.
Amazingly Kyle managed to resist the temptation to sing “Sit on My Face” from Monty Python. 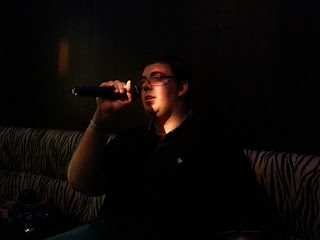 After karaoke it was getting pretty late so Kyle and I headed back to Misato to get some rest. Koshigaya was a great spot to finish off the day.
Posted by Daniel Snowden at 01:50