With Kyle still not feeling 100% (running around showing me all the new places so far this trip hadn’t given him the chance to recover) our original plan for the day was for me to go out and explore somewhere like Omiya (in Saitama) or Tokyo while Kyle took the day to rest and regain his strength. Kyle, in keeping with his ganbatte spirit, later suggested that he show me Kashiwa (in Chiba). The reason for this was that there are lots of old retro-game shops around so I would have a good chance of locating some Yu-Gi-Oh games I was hoping to play.
For those who are interested, here is a little information: https://en.wikipedia.org/wiki/Kashiwa.
Since we were travelling from Saitama prefecture to Chiba prefecture, this was a fairly long train journey requiring switching lines. Normally, this is something that wouldn’t be a problem. Unfortunately, we had to switch at the dreaded Nishi-Funabashi station. This wasn’t a problem on the way out, but it would be a serious problem on the way back. For the uninitiated, we had to switch between the Musashino and Chuuou Soubu lines and the signs for the Musashino line at Nishi Funabashi are… wrong. The Musashino line branches in a few places and Nishi Funabashi is one of the stations where this happens. Helpfully, there are different platforms for different destinations (4 in total). Less than helpfully, they are all labelled with the same destination. Returning to Misato would not be an easy mission!
After arriving at Nakano, Kyle and I surveyed the surrounding area to get our bearings. By this, I mean we lost track of which exit we needed and had to have a quick look around. After identifying the correct exit, we proceeded to our objective – Nakano Broadway. Located at the end of a long shopping arcade, Nakano Broadway is a shopping centre filled with all manner of game, anime and generally geeky shops. Think Akihabara in a single building!
With three floors of anime and gaming goodness, I was in geek heaven! Having already maxed out my capacity for anime character figures, I focussed on smaller trinkets. Among the various items available for a number of earphone jack accessories (characters that dangle from your phones earphone socket) and some themed folders (featuring some Macross Frontier characters). Kyle, on the other hand, was on a mission to find a Bakura figure (Yu-Gi-Oh).
One of the other interesting items I came across was a Yu-Gi-Oh! themed T-Shirt, featuring the phrase: "Ore no turn!" (It's my turn!). I saw that and had to buy it! (lucky for me I'm starting to lose weight - recently I've been able to fit in to Japanese M size T-Shirts, or maybe they're designed for portly otaku?) 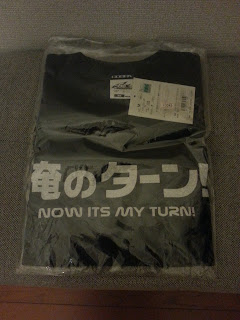 After a complete anime overload, we were in need of food to keep us going on our epic journey. Sadly, Kyles favourite Indian curry restaurant wasn’t open (I was looking forward to seeing what Indian curry in Japan was like) so we had a look around for somewhere to get Japanese curry. I was satisfied with the result although Kyle, who had become quite the connoisseur of curry, a little less impressed (not a bad curry but not the best he’s ever had).

At that point we decided to start our journey back. The night was still young so we needed something to do in the evening. Our first train back passed Akihabara so we decided to stop off there. This actually had an unintended bonus – we could catch the Tsukuba Express and therefore avoid the need to change at the dreaded Nishi-Funabashi. I still had a game I was looking for and Kyle still needed his Bakura figure so we still had a mission.

Sometimes, it seems like the Gods are against us as we were both unsuccessful in our missions.


No matter, it was still an enjoyable day.
Posted by Daniel Snowden at 09:02