We started the morning off with a trip to Koshigaya Lake Town, specifically, the large Aeon shopping mall just outside Koshigaya. We were running a little low on ideas and Koshigaya was just a few stops on the Musashino line so it seemed like a good way to start the day.
I’d been to Laketown before and had found that the size alone meant that there’s plenty to do.
First things first, neither of us had eaten so lunch was the first order of the day. As a large mall it’s to be expected that there’s a large food court. My choice of lunch was Barayaki: a relatively simple dish consisting of fried beef and onions served with rice. It was served up in a nice bento style box. 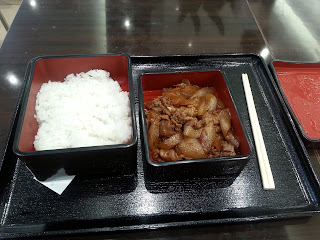 We browsed for a while but unfortunately weren’t able to locate the Starbucks in the outdoor area that I’d commented on in previous blog posts. I suspect this was in the second of the two mall structures “Mori”, we spent the whole time in “Kaze” (The mall consists of 2 main structures linked by a walkway). Disappointingly, we also found that the arcade had closed down. The cinema was still there but there didn’t look like there was much worth watching.
With time marching on, it was time to return to Misato. We stopped by LaLaPort on the way back where we noticed a rather creepy inflatable Anpanman as an attraction. Kyle tells me that Anpanman is the ultimate zombie as he (in the cartoon) rips off bits of his head (including jam, which appears to be his brain) and offers them to friends as a snack. Weird! I was more worried about where the entrance/exit was… 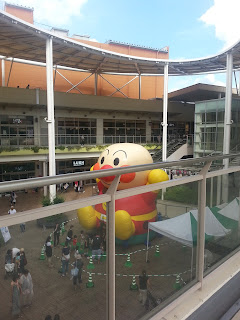 After LaLaPort we returned to the apartment, giving me a little time to catch up on the copious amounts of writing I needed to do and work out potential arrangements for meeting friends who were near the area at the time. Between this and needing to take a little time for Kyle to regain his strength (the poor guy was feeling quite worn down and a little unwell) it was pretty late by the time we thought about getting dinner. Kyle’s suggestion was a local Pizza restaurant with an eat all you want option. Once again, I hadn’t experienced much of the Japanese adaptation of western dishes so this was a useful opportunity. They operated a similar system to Brazilian steakhouses where you turn a card over to indicate whether you want more pizza or not.
The pizza base was definitely in the Italian style, by that I mean thin crust. This was great because it’s my preferred way of having pizza. Pizza was brought out by the slice so we could try a variety of toppings, some standard and some a little more unusual. Probably the most unusual was teriyaki chicken, it was strange but it worked pretty well!


After the “main” pizzas there were also a number of “desert pizzas”. This was a mind blowing concept for me. All in all, it gets the thumbs up from me!
Posted by Daniel Snowden at 04:41