I woke up bright and early at around 08:00. That being said, I’d woken up for around the third or fourth time. Jet lag does funny things to my sleep cycle, but one advantage is that it lets me wake up nice and early for a few days at least.
Our plan for the day was to meet Kyle’s friend from the previous day in Matsudo for coffee. Kyle and I aimed to arrive early so that we would have time to explore a little. Arriving at Matsudo, we soon found that we had a serious navigational hazard to contend with: Pokemon Go players! Some days, I’m tempted to write a game where you have to avoid Pokemon Go players running in to you. After staging a quick re-enactment of the asteroid belt scene from The Empire Strikes Back, we had a look around the food hall of a nearby department store (デパート).
While browsing, we found an opportunity to sample one of my current favourite snacks – taiyaki! The taiyaki were made on request, so freshness was guaranteed.

As with other times I’d seen taiyaki, there were several different fillings available. The traditional filling is anko (sweetened bean paste), because Kyle didn’t like bean paste we ordered cream filling (makes ordering a little easier).
After a little wandering around, we were starting to feel hungry. In his infinite wisdom, Kyle’s suggestion was: “KFC”. Don’t worry; he hadn’t jumped the shark tank (well, at least I didn’t think so at the time). Japanese KFC is quite different to KFC found elsewhere. The batter is less greasy and it’s milder (less spicy) than found elsewhere.
It turned out that we had made a slight error when ordering, we somehow ended up ordering two sets for each of us (which explained why it seemed a little expensive). Still, it provided us with the opportunity to try the regular set and the super spicy set (not really spicy by western standards, but spicier than the regular version).

Our next stop was the coffee shop, we had arrived a little early so located some suitable seats and bought a round of peach teas. Peach tea – what a marvellous drink! It was very refreshing and had a very subtle flavour; it tasted a little like tea but with a hint of peach. Certainly not an overpowering flavour. After fifteen minutes or so, it seemed we had made a possible miscalculation. Kyles friend was nowhere to be found and it was already our arranged time to meet, punctuality is important in Japan but we paid it no mind and decided to wait. Half an hour later, we began to suspect that something was wrong. With Kyle’s phone out of credit, we appeared to be running low on options. Fortunately however, I was on the ball and suggested using my phone to check. As it turned out, we weren’t supposed to meet at the coffee shop, we were supposed to meet at the train station. Oops, we’d accidentally left her waiting at the train station for over half an hour – the afternoon was not getting off to the best possible start. Once we were all together, we stopped short of a dogeza apology and enjoyed a few more peach teas.
Our next stop proved to be quite useful, we were doing some shopping and found a bookshop with a good language selection. Besides books for Japanese speakers who are learning other languages, there were also books for speakers of other languages to learn Japanese. Given my hit-and-miss Japanese, some additional resources would be pretty useful. In the end, I settled on a book of JLPT N4 grammar as I needed to brush up on some of the more complex verb forms.

As evening approached, Kyle and I had returned to Misato and needed to answer the important question: “Where do we go for dinner?” The answer to that question was simple: Steak!
A great thing about the steak restaurant in Misato was that (besides good steaks) there was an all you can eat salad bar. It’s worth noting that the salad bar also includes curry and rice. This afforded me the opportunity to satisfy my cravings for meat (perhaps the yakiniku brought out my carnivorous side?) and for Japanese curry. 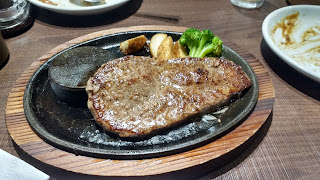 After filling our stomachs, we were prepared for all that the next day would throw at us. Or so we thought…
Posted by Daniel Snowden at 08:34