Apologies reader, this update is a short one. After a busy few days, I ended up falling behind on my writing so the details aren’t as fresh in my mind.
The fourth day took us once again to the city of Matsudo, although we’d already been there, it was a large city so there was plenty more to see and do. Most of the day was spent wandering around the various shopping areas. Observing the various shops provided an unexpected form of entertainment; looking for some of the more unusual uses of English in shop names. The use of English in names can make shops stand out a little more (for example through unusual names or the use of typefaces which might not normally be encountered with kanji/hiragana/katakana names), it can also make names seem a little nonsensical.
For example, we stumbled across   “impact hair laboratory”, Kyle and I weren’t quite sure about how “impact” would apply to hair styling. We decided that we’d rather not find out first hand and quickly moved on. 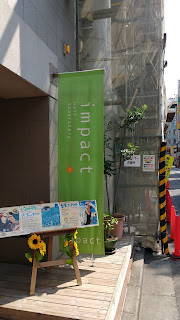 Our investigations of the local shops soon lead us to a supermarket which formed part of a larger shopping centre. Since these places could usually be quite interesting, he had a look further inside.
As is commonplace for such shopping centres, this one had a rooftop terrace. One of the more unusual features was a rooftop Italian restaurant.
As was expected of the Japanese summer we were starting to get a little dehydrated (by “little dehydrated”, I mean “close to being mummified”) so it was time to stop for (iced) coffee and some lunch.
On the way back, for some reason, we decided to stop off at Shim Matsudo. We passed Shim Matsudo on the way each time and thought it might be worth exploring. In the past, we did the same thing exploring Kita Senju when we were on the way back from Asakusa and found a few interesting times. At Shim Matsudo we were in for a bit of a disappointment, the best description I could find was “sleeper town” (somewhere that’s populated primarily by commuters). We couldn’t see many shops or restaurants, the few shops we did see were mainly convenience stores and the restaurants looked like they were for what I call “nomification” (nomihoudai – after work food and drink).
There were a few unusual sights. The first was somewhere called “Club Jesus”, Kyle and I were at a loss as to what that establishment might have been. Perhaps it was a church’s attempt at rebranding? Who knows. 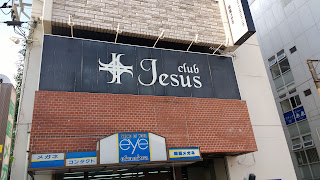 Another unusual sight was a sign for… something, that looked suspiciously like it had been “inspired” by bewitched.


This may have sounded like a less interesting day than other days, but on this trip I’ve been seeing less of the “touristy” side of Japan and seeing a bit more of the “everyday” Japan. So fat, it has provided an interesting glimpse in to what life in Japan is like (something that you don’t really get a picture of as a tourist).