As usual, Kyle and I ventured out near lunchtime. While it’s generally not a good idea to waste the limited time available when in another country, I wasn’t particularly fond of waking up too early when on vacation (a morning person, I am not!). However, my morning routine did consist of enduring the sweltering heat for long enough to buy a can of coffee from the nearby vending machine. The milky (latte) version of Japanese canned coffee made for a nice morning kickstart. It’s worth noting that Kyle had already banned me from drinking black canned coffee – Kyle learned a few years ago that the black coffee did something to produce the worst breath known to man. It appeared that the stuff was notorious throughout all of Japan!
The plan for the afternoon was explore Kashiwa. Kashiwa had a large “Hobby Off” (similar to the “Book Off” bookshops) where I would be able to find new anime figures to add to my ever growing collection. I spotted a few figures I wanted to add to my collection, but knew my suitcase space was finite so priorities were needed. One of the figures was a Figma (poseable) of Asuna from Sword Art Online (before you ask, no, it's not going to be used to set up creepy situations with the Revoltech Woody figure... welll, probably not).

By a stroke of luck, Kyle spotted a Yugi figure from the Yu-Gi-Oh! “Dark Side of Dimensions” movie. I decided that I should get a Yugi figure as I already had a few “Dark Magician Girl” figures and didn’t want people to start thinking I had some kind of Dark Magician Girl fetish. Let’s just say that character has inspired some, shall we say, “interesting” fan art. I was going to include an example, but I’d rather not make this blog NSFW.
My plan for the evening was to meet with Yoshi in Shinjuku. The background, for those who are not aware is that Yoshi was a member of the Japanese study group (the Sakura Kai) in Leeds and was also a teaching assistant one year. Those who have followed the blogs of my previous trips will probably already know that I had planned to meet with Yoshi last year, however, I was unable to as a job interview came up at the last minute so he couldn’t make it to Tokyo. While it was disappointing that we didn’t get to meet, I was happy that Yoshi had been presented with a good opportunity.
Upon arriving in Shinjuku, I started to realize a slight problem with our plan. We chose Shinjuku because many different rail lines met there so it would be an easy station for both of us to reach. Unfortunately, this also made Shinjuku the one of the largest and most complex stations in the entire network (I sometimes like to joke that an elite exploration team from Lonely Planet disappeared during an expedition to map Shinjuku station).
I’d arrived at Shinjuku a little early (as a precaution) but did not know exactly where Yoshi would be. It was the kind of situation where having the rental phone/SIM proved invaluable. We had already exchanged numbers so I was easily able to let Yoshi know exactly which ticket gate I was waiting at. Despite the station being incredibly busy (believe me, UK rail has nothing on Japan!), we were aided by the fact that (as a blonde gaijin) I stuck out like a sore thumb.
After Yoshi successfully located me, we went out to a nearby restaurant. Prior to that day, when he suggested going out for food, he’d asked me what kind of food I wanted. I was keen to try new foods so Yoshi suggested oden. Although traditionally a winter dish, it was something that we could still enjoy in summer.
Over the next few hours, we chatted about how things were going for each of us in the UK and Japan. Because I hadn’t heard much about what Yoshi as up to, it was great to find out how things were going for him. We did most of our chatting in English (as my Japanese was limited, so that would have made it difficult to discuss complex topics) but I did get a few opportunities to practice some of my Japanese.
After a few hours of good food, beer and interesting discussions, it was time to head home. We said our goodbyes at Shinjuku station and I planned my route back. Although expensive, I opted to return via Akihabara as the Tsukuba express was the most convenient way of getting back. Next to Akihabara stations, I could see there were plenty of promotions up for the new “Kizumonogatari” – the origin story for the Monogatari series. I’d been a fan of the Monogatari series for a while so Kizumonogatari was something I was quite excited about.
I also happened to notice a street performance from a singer who appeared to be promoting an album. It was good to see that independent musicians are still going in Japan and that AKB48 hadn’t completely taken over. 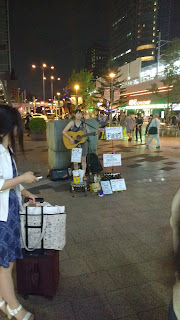 Thanks for reading. Tune in again for an evening of nomification and graphic design (not in that order though!)
Posted by Daniel Snowden at 01:32