On to Osaka and Hitroshima

After spending a few days in Saitama we've moved on to the next leg of the tour.  Hiroshima.

The reason for going to Hiroshima is to visit Setoguchi San (せとぐち さん).  For those who didn't follow the "Seriously Shinto" blog, Seto is a friend of Kyles whom I met when I was in Tokyo back in February.  I was a little nervous about meeting Seto last time but was happy to find out that he thinks I'm cool.

In order to save costs for Kyle and to see a little more of the countryside of Japan, we opted to travel by coach (Willer Express).  Here are a few samples of the pictures: 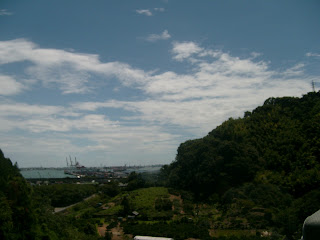 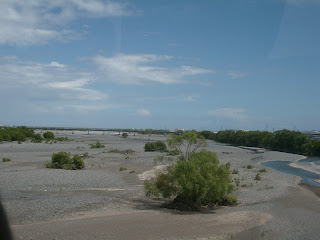 Because the coach trip is actually 2 separate journeys (Tokyo to Osaka, Osaka to Hiroshima) we got to spend a little time in Osaka.  By a little time, I mean enough time to frantically try to find the bus terminal and then enough time for a nice relaxing dinner.

As it turned out, the bus terminal was in the Sky Building.  Sky building is a landmark building complex featuring an observatory at the connection between the 2 main towers. 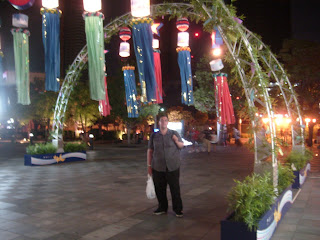 In the part of the complex named "Fun Fun Plaza" there is access to the observatory along with a large number of restaurants (レsツラン) in the basement.  After selecting a suitable venue, a nice meal of Katsu Curry and Plum Wine (that plum wine is powerful stuff!) we had plenty of time to wait while checking in.

If you are thinking of using this cheaper alternative to the Shinkansen please bear in mind that all announcements are in Japanese.  That being said, the staff spoke good English and were very helpful and friendly.  I think this service is quite popular with both locals and Gaijin.

After arriving in Hiroshima I can safely say that there is a reason I don't do overnight buses/coaches.  I can't sleep in an upright position!  I have the same problem with airline flights.  All being said an done, we got to our destination and it didn't cost the earth.  If you need something a little more comfortable, Willer seem to offer a range of seat types (certain coaches have improved seats) and this goes up to what I can only describe as a "first class style reclining pod".

Following our arrival we had some time before checkin (try checkin is at 14:00 and we arrived at 06:00) so after grabbing some breakfast, we dropped our bags off at the hotel and did a little exploration.

We managed to find a small Shinto Shrine near to the hotel, providing Kyle with an opportunity to expand his ever growing Ima collection (and to have a chat with the priest of the shrine).

August 6th was the anniversary of the atomic bombing of the city of Hiroshima so we journeyed to peace park to attend the somber ceremony and to pay our respects to the 140,000+ people who died during and immediately after this attack.

Unfortunately, a group opposed to nuclear power chose to use this rememberance day to launch a protest - something I found rather disrespectful and distasteful. 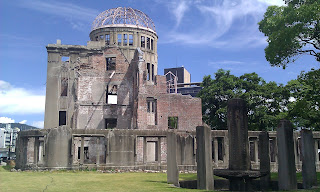 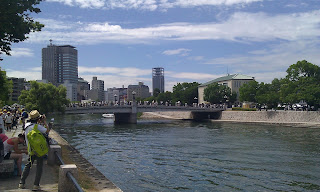 For a long time I've believed that nuclear weapons are an incredibly bad idea, but anyone who thinks they are a good idea should go to this place.  This, ladies and gentlemen, is the reality of nuclear warfare - over 70,000 lives wiped out in an instant and a further 70,000 died in the immediate aftermath.  I hope we never allow such a weapon to be used again.

After this somber visit, we went to the Starbucks in the NHK building (they have an office in Osaka) and proceeded to consume our respective body weights in iced drinks (this certainly made me wonder how much  I've managed to undo my recent weight loss).

Finally we were able to checkin, grab baths/showers and freshen up ahead of meeting Seto.

After meeting Seto we visited the war museum, bought a new hat to add to my collection (I didn't bring any of mine and I burn easily!), grabbed dinner from a street seller and went to a nice little bar Seto knows.

One of the bar staff is an old friend of Seto's so we spent the evening chatting away and downing long island ice teas.  Suitably fresh, we called it a night and headed back to our respective abodes.

So far, this is proving to be a very nice trip.
Posted by Daniel Snowden at 09:34