Being as indispensable as ever, Kyle had been called in to work and would be indisposed for most of the morning.  This wasn’t an issue as I had been hoping to check out Akihabara (and pick up a few new figures for my collection) so this seemed like the perfect opportunity.  The plan was that I would go to Akihabara during the morning, then meet up with Kyle when he had finished work.  I knew Kyle wouldn’t be in work for long so I decided to set off early so I could maximise my time.  After leaving the apartment around half 8, I arrived in Akihabara at around 9.
At that point I realised the flaw in my plan.  Most of the shops open later than someone in the UK would normally expect, many of them opening around 10 or 11 (but closing much later).  With few other options, I opted to turn the situation to my advantage and took the opportunity to do a little recon.  In previous years I’ve sometimes had difficulty locating the figure shop I normally use.  This time round, finding the shop was relatively straightforward (found it within five minutes of leaving the station) and noted the Manseibashi police station as a landmark as this was close the main junction.
Having already found the place I was looking for and walked around the area, it was still only 09:30 and I had some time to kill before the shop opened so I clearly needed something to do.  The morning heat was already building up and I knew I had to get indoors and get something cold to drink before I melted.  Having reached the plaza surrounding the UDX building (you can see it if you leave the JR Akihabara station from the exit next to “Gundam Café”) I decided to give Excelsior Caffe a try.  At times like this I’m grateful that my Katakana is improving and even more grateful that I was carrying my trusty smartphone.  Even in airplane mode, the Obenkyo application helped to fill in any gaps in Katakana words that I couldn’t quite figure out.  For those who are not familiar with Katakana, it’s a writing system used for foreign words.  Since coffee shops have almost the entire menu in Katakana, it’s pretty useful to know.
With a little stumbling I was able to order an iced coffee drink and enjoyed the nice, air conditioned, surroundings until I was sure the shops would be open.  Iced coffee drinks are very popular in Japan in summer and I can confirm that they’re much more refreshing than hot coffee.
With the Hobby Figure open for business, I set about choosing some figures to add to my collection.  One thing I was taking in to account was that I have a Revoltech Sheriff Woody “creepy woody” (do a search for “hentai woody” on google and you’ll see what I mean) figure on preorder – so I’d need some figures that I can make it look like he’s harassing.  I'm going to have a lot of fun ruining peoples memories of Toy Story with this!
After much deliberating (and cursing my lack of suitcase space – even with two suitcases on the way home) I opted for a figure of Leafa from Sword Art Online and a Nendoroid of Hachikuji from the Monogatari series.

With a little time to spare before meeting Kyle, I decided to do a little more exploration and check a few more shops (and pick up a few more goodies). This was close to midday, the time I usually try to avoid being outdoors.  In Akihabara, I found there was a significant advantage to this time.  At the hottest and brightest point in the day, only the hardiest maids dared venture outdoors.  The end result – I only saw a single maid. You see, I’ve been asked before if I don’t like cute maids.  The answer is that getting pestered to visit maid cafes does get very old, very fast (although I will admit that the initial novelty is part of Akihabara).  Among the tokens and trinkets I picked up, one I was particularly happy with was a Sword Art Online “Immortal Object” flag T-Shirt.  This time I had the good sense to order a Large size – the Medium sized Evangelion shirts I picked up last time are just a little on the small side (though they are a good motivator to lose weight at least)
With everything I wanted to check in Akihabara sorted, it was time to meet Kyle at Akihabara station.  Upon meeting Kyle, a surprise was revealed.  Kyle was with Sato Sensei (from his previous school)  and she had kindly offered to show us around our choice of museum in Ueno.  Before heading out to Ueno, the three of us got some lunch (this was especially good news for me as I’d been on my feet all morning so I was looking forward to food).  The plan was to go to Sato Sensei’s favourite sushi restaurant (in Akihabara).  It was already known that I’m not a particularly big sushi fan but the restaurant also had a choice of hot and cold soba (buckwheat) noodle dishes.  I opted for a hot noodle dish, Kyle and Sato opted for an assortment of sushi.  Over lunch we chatted and discussed the differences between the education systems in the UK and Japan.
With our hunger abated we departed for Ueno.  The museum we opted for was the National Museum of Science and Nature.  We chose this as there was a special exhibition of fossils of prehistoric Japanese mammals.  This is something for which there is very little documentation/material available outside of Japan so it was a great opportunity to see a very rare sight.  The museum didn’t have many English translations available, so Sato Sensei’s translations of exhibit notes were much appreciated.

The fossils showed various, now extinct, mammals including elephants.  It was quite amazing to see how the elephants had changed in the time since Japan separated from mainland Asia.  Part of the exhibit included a model of how this process is believed to have happened.  From what I was able to gather, much of it involved changes in the sea level.

Among the many exhibits in the main area of the museum, there was an exhibit showing how modern humans evolved.  This exhibit showed mannequins/models of an early man and woman.  These models were… shall we say… anatomically correct.  Being adults with an interest in science and learning, the three of us thought nothing of this.  After walking away, we heard a kid yell “Oppai”.  I knew I’d heard this word before, unless I was mistaken it was “boobs”.  So I asked Kyle “did he just say what I think he said?”, before Kyle could answer we once again heard “oppai, oppai”.  None of us could keep a straight face at this point.
After absorbing so much information that our heads were at risk of exploding, we headed over to the museum café for a coffee and a snack.  This being Japan, the deserts were in cute shapes and I couldn’t resist the panda parfait. 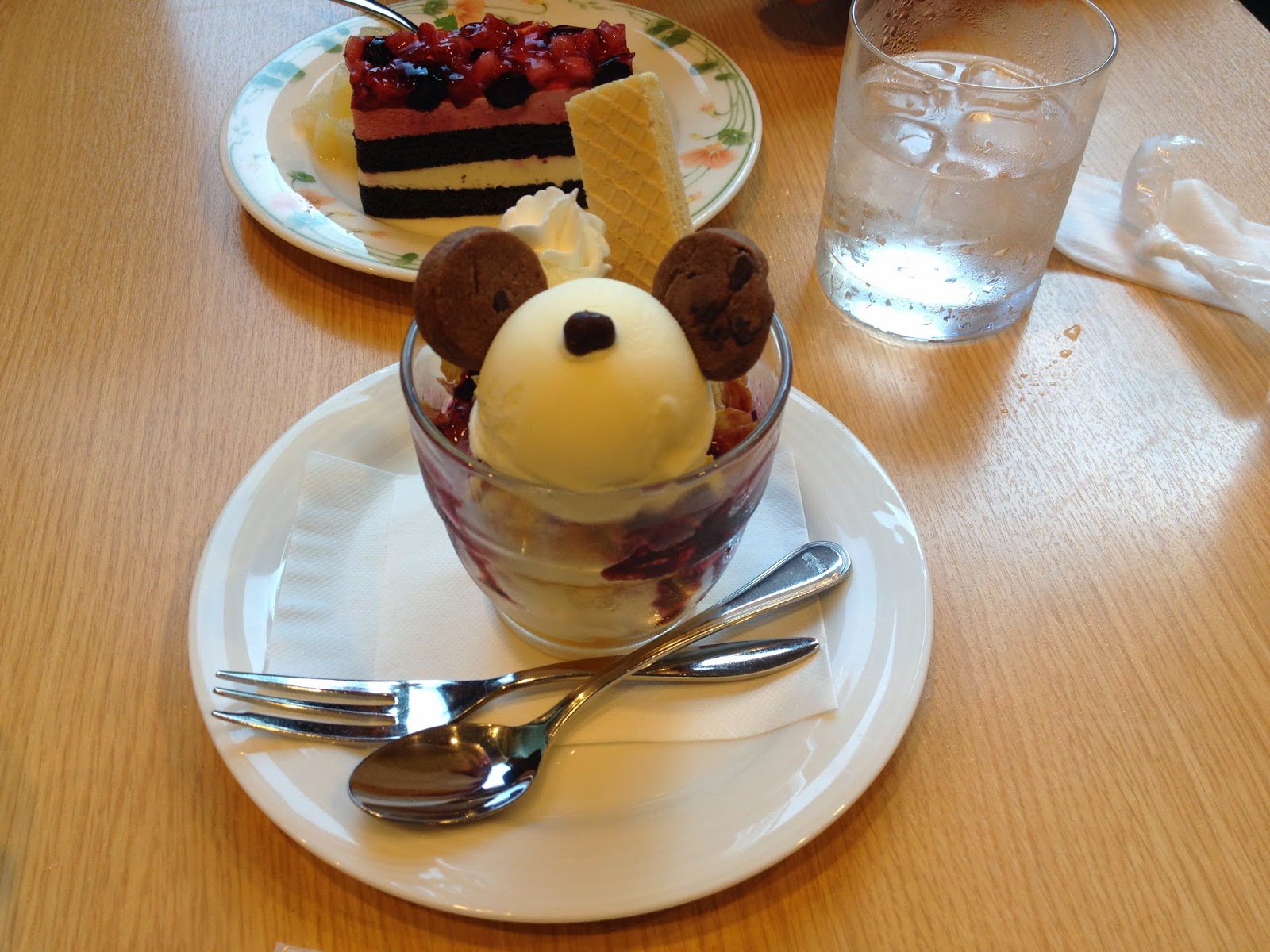 Following an enjoyable museum tour, we thanked Sato Sensai and parted ways, with Kyle and staying to have a look around Ueno park.
Compared with Yoyogi park, which Kyle and I visited when we were staying in Shibuya, I can safely say that I prefer Ueno park.  This is, of course, a subjective opinion so do try to visit both.

There’s also a shrine in Ueno park, so it provided a perfect opportunity for Kyle to add another shrine to the list of (400 or so) shrines he’s visited since he first stepped foot in Japan.  I found that shrine to be a particularly interesting one as there was a line of Torrii… what is the plural of Torii?  Anyway, I found it to be an interesting feature.

By the time we had finished looking around the shrine, we could tell it was going to get dark soon so we thought it would be safer to head back to familiar territory.  I should note that this wasn’t because we were afraid of crime or anything like that, it was simply that the area wasn’t familiar so could be problematic for Kyle.  Since we were attempting to cram as many activities in to the day as possible, we headed back to Akihabara.
While in Akihabara we made a rather sad discovery.  Kyle suggested that I buy an artbook from the “Panty and Stocking” series and that K-Books would be a good place to buy it.  K-Books is a well known bookshop in Akihabara that offers the usual manga and artbooks along with a wide selection of doujinshi (fan made comics).  The sad news is that we found that K-Books was nowhere to be found.  The 2 floors of the building it occupied were vacant.  There was no sign suggesting they had moved.  Could this be the shape of things to come?  I’ve heard that the “New Akiba” is trying to shake off the image of the otaku haven.  It does make me worry that Akihabara will become just another shopping district.
To console ourselves, Kyle took me to his favourite curry restaurant where I was introduced to “Home Run” curry.  This is the curry equivalent of “The Works” for pizza.
With that, we decided it was time to head back to Misato.  Leaving it until around 22:00 meant that the Tsukuba Express was at it's busiest, the same applied to the Musashino line as well.
It was a long day but I got to see some great sights and try great food.  See you later folks.
Posted by Daniel Snowden at 06:32