Following the usual mornings awakening, provided heavy traffic (seriously, why did Kyle have to get an apartment right next to the main road through Misato?), it was time to settle in to the usual routing of fighting over the shower followed by finding a secluded place to get dressed, it was time to make plans for the day.  For this particular day, the plan was to visit Omiya – a city known for its restaurants, festivals (matsuri) and red light district (how Kyle knew this, I do not know and did not ask).
After gathering together most of the things we needed for the days expedition, I went to look for my shoulder bag/messenger bag.  After a few minutes of not finding it I started to get annoyed.  After a few more minutes fear gave way to panic.  I couldn’t find my bag.  I stored my passport in the front compartment as I needed to keep it with me at all times.  Oh s*&#!  Loss of passport is one of those nightmare scenarios that no traveller ever hopes to face.  It was time to build up a mental map (which means it’s one of those fancy, holographic, ones with expensive looking effects).  Where was the last place I saw it?  Was it the Apartment? I couldn’t remember 100% whether I had it there or not.  Was it the Ramen restaurant? I remembered not just having my bag, I remembered where I put it down and even in what way I picked it back up again.  Where else was left? The 7 11! Reconstructing the scene from my memories, I remembered putting it down when paying for my purchases, but not picking it back up again.  That must be it!
The day was particularly hot, making the trek to the 7 11 that much more arduous.  Would it be there? Would I have to call in assistance from the embassy? Arriving at the 7 11, I relied on Kyle to explain to the best of his abilities.  After managing to explain more or less that I’d lost a bag, they produced a bag that looked identical to the one I was looking for.  Was this it?  I nervously checked the front compartment and… there it was.  After thanking the staff and adding 私はとてもばかです！ (I really am an idiot) we headed back.  As we already had everything we needed and would therefore be able head on out, next stop was Misato station.  An important lesstion had been learned, always keep your passport on your person! (that’s it, I don’t think I can call myself a seasoned traveller anymore)
The journey to Omiya isn’t particularly short but involves transferring at one of the busiest stations in the area – Minami Uruwa.  The route involved taking the Musashino Line to Minami-Uruwa, then changing to the Tohoku line for the rest of the journey to Omiya.
Upon our arrival at Omiya, we saw that a Mikoshi was being prepared.  This could only mean one thing – preparations were being made for a matsuri (the Mikoshi allows a shrine’s Kami to be present at the Matsuri, well it’s not quite that simple but it’s as good an explanation as any).  Given that Kyle can’t get enough of Matsuri, he made enquiries about the dates and noted them in his calendar.
With Kyle’s hunger for Matsuri satisfied, it was time to satisfy my hunger for food.  We surveyed some of the many restaurants available and I noticed that not all of the establishments offered… food.  Yep, the red light district was right next to the restaurant district.  Well, I guess that’s… efficient?
Eventually we settled on a Ramen restaurant, as I only had shiro (soy based broth) ramen and was hoping to get tonkotsu (pork bone broth)  ramen while I was in Japan.  Tonkotsu is pretty much impossible to find in the UK, real tonkotsu broth involves slowly simmering bones to get as much flavour as possible out of them.  Once you’ve had real tonkotso, nothing else compares!
Anyway, we decided on a small restaurant and ventured in.  Studying the menu, it looked familiar.  We managed to pick a restaurant from the exact same chain as the one we went to last night in Misato!
After finishing enough food to feed an army (2 sides and ramen – that’s it, I’m not letting Kyle take care of the ordering again!), we began our journey to the major shrine in the area.
An interesting thing about this shrine is that the path leading to it has a row off trees on either side.  On a particularly hot and bright day, the shade this added was a lifesaver! 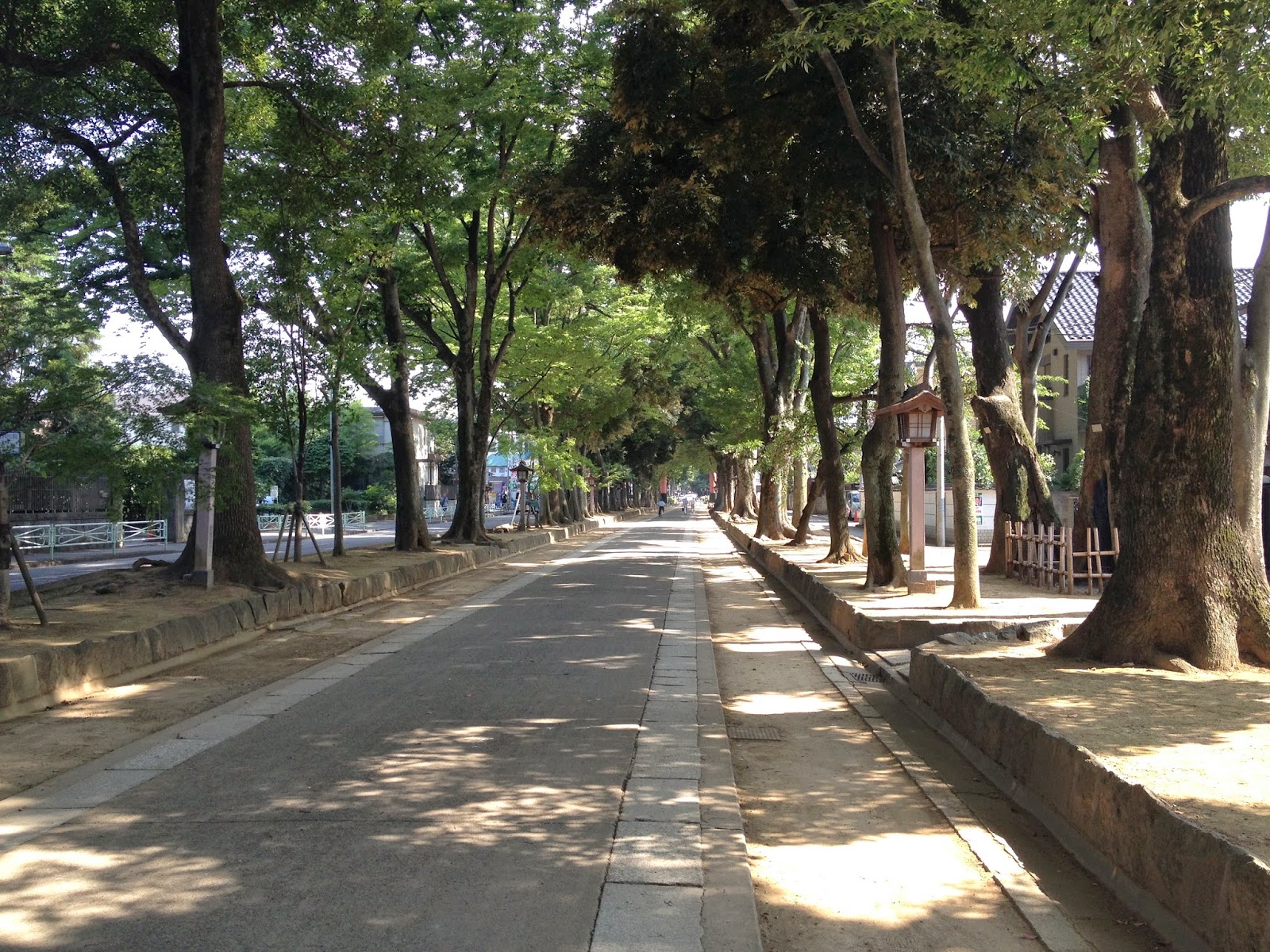 The shrine was situated in the middle of the park so it was a particularly beautiful location.  The shrine buildings were beautiful, as I would normally expect, but with all the preparations for the upcoming matsuri there were a lot of vehicles and machinery.  This diminished the beauty of the setting somewhat.


The high temperature of the day had obviously taken its toll on Kyle.  He was feeling hot headed and not his usual bombastic self.  Kyle almost fainted on a few occasions, I’m not sure which was scarier: Kyle fainting or the possibility of me being crushed as a result.  Given this situation, I recommended that we should head back to Misato to get some rest.
See you all next time.
Posted by Daniel Snowden at 07:40