Once again, Kyle demonstrated his tendency to be utterly indispensable at work and was called upon to help out with the speech contest. Therefore, once again, I would need to venture out myself and keep myself entertained. This is something Kyle has felt quite bad about during this trip, we initially thought that we were going to have more time together but during this trip so far he’s shown me a new place pretty much every day so that more than makes up for it.
The plan for the morning was to go to somewhere like the Koshigaya Lake Town shopping centre.  As I had some catching up to do for the blog and it was an especially hot day outside, I opted to spend the morning in the apartment catching up on blog updates and performing some initial checks for online check in (for my return flight home, it made sense to check in as early as possible as JAL web check in opens about three days or so before the flight).
During the evening I was going to catch up with Graham. This requires a little background from last year’s trip so please bear with me: Bryan and Graham are two Americans Kyle and I met at the Zen Hostel in Nikko last year. We got on quite well at the hostel during the first evening so we all decided to explore Nikko as a group, we’ve kept in touch on facebook since then. Bryan was already working as an ALT in Niigata and Graham started working as an ALT this year. When Graham found out I was visiting Japan again he suggested that we meet up one evening as he was working close enough to Tokyo Prefecture that somewhere in Tokyo would be a good middle ground.
The venue we opted for in the end was Shibuya. This seemed like a good idea seeing as I hadn’t been to Shibuya for around 2 years (I stayed in Shibuya first time I was in Japan, during the February trip and I remember going to the horror themed restaurant in the August of that year).
The route I used to get to Shibuya involved transferring at Musashi Uruwa so I had a few minutes spare while waiting for my second train. There were two things I discovered at this station: Firstly, with this being one of the hottest days of the year, pretty much every vending machine in the station had sold out of water. I can only assume this applied to every vending machine as this applied to every one I tried. All four vending machines on the platform had sold out, the vending machines inside the station had sold out as well.  Wanting to avoid fizzy drinks, I eventually opted for some kind of iced banana drink as I needed at least some kind of cold liquid.
Secondly, there are some weird adverts.  For example, there’s this one I found on the platform I was waiting on. 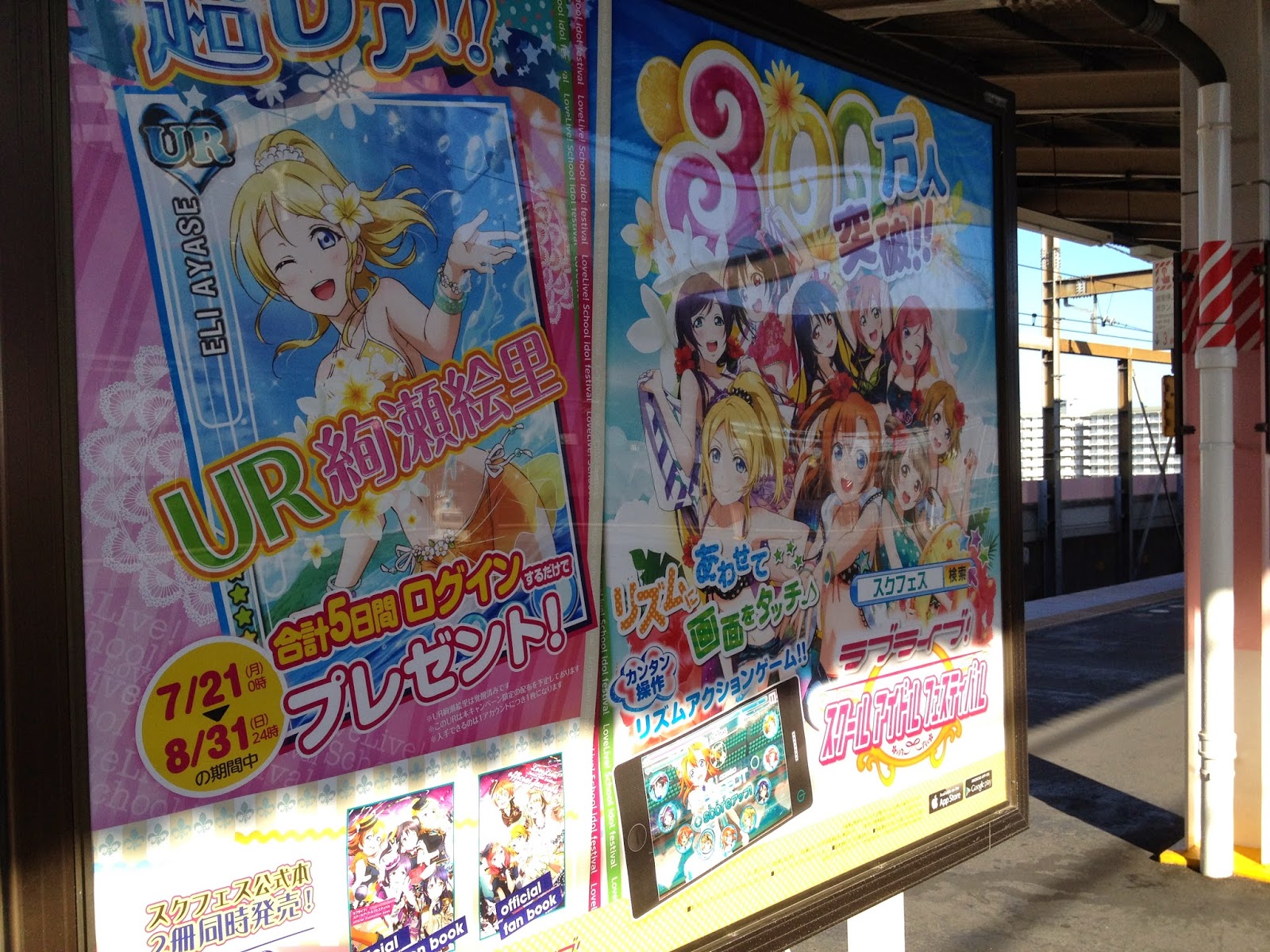 I think I can safely say that I have absolutely no idea what’s being promoted here but, as expected, there is some kind of anime/manga style to the advert. I’ve noticed that a lot.
Eventually, my train arrived and I was able to complete my journey to Shibuya. Shibuya, as with many of the larger stations, has several exists (though not as many as Shinjuku). Here is one of the situations where having a local cell phone was a lifesaver, it would have been impossible to organise this without one. It also helped that I arrived early so I was able to scout out various exists and potential meeting spots. Being unable to locate the exit for the subway line Graham was using, I had to resort to using my wits (scary, I know). I could see that one of the station exists led to the Shibuya Mark City shopping centre and there was a balcony on the second level of the station leading to Mark City. This seemed like a good vantage point to spot Graham and standing on the balcony would make me easier to spot. With a little guidance over the phone Graham was soon able to locate me and we soon began to catch up on what had happened throughout the year.
After leaving the station Graham was able to point me in the direction of the Hachiko statue, I missed the opportunity to see this when I was in Shibuya previously. For those who don’t know the story, Hachiko was an Akita dog who belonged to a professor who lived in Shibuya and worked in a Tokyo University. Every day Hachiko would wait for the professor outside Shibuya station to greet him when he returned home from work. Years after the professor’s death, Hachiko was seen outside Shibuya station at the same time every day, expecting his owner to return home. 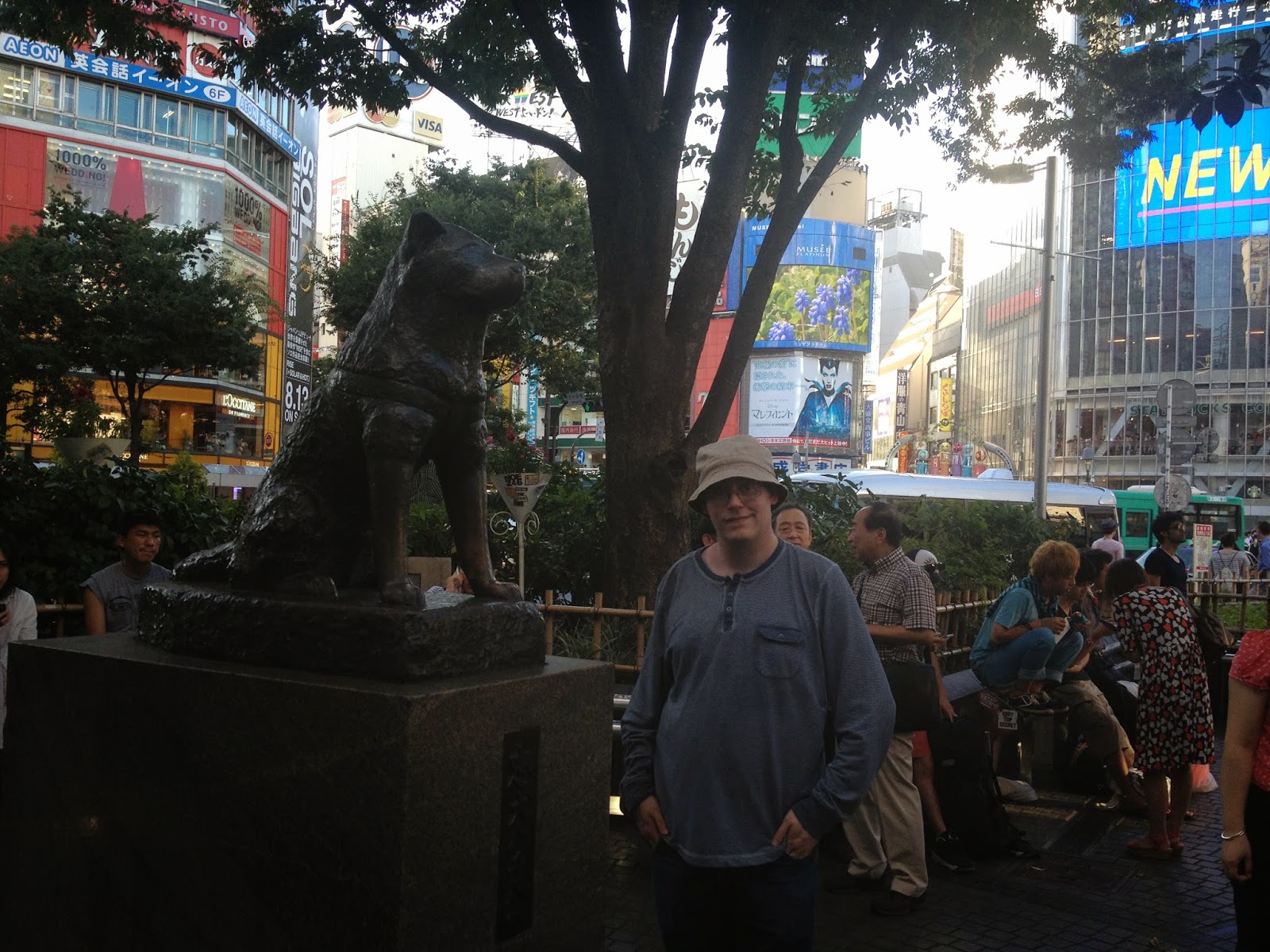 Our first stop was an English style pub (not the Hub) that Graham occasionally goes to. This also provided the opportunity to get a real Brit to comment on their “fish and chips”. The fish wasn’t a bad approximation (small fillets in a batter that’s a little bit like tempura) but the “chips” were basically potato wedges. They do get points for having malt vinegar though. While at the pub, I was also able to try a rather hoppy American IPA.
With food and drinks finished we did a little window shopping in Shibuya and general wandering around. While wandering around I noticed the infamous “Information Centre” from the first trip. Graham had never encountered this type of “information centre” before so I had to explain the whole comical story.
Graham also suggested that it may be a good idea to move on to Akihabara afterwards. Although I’d already been to Akihabara previously in the trip, there were a few other shops I wanted to have a look around and it was only a few stops away (plus it’s a really easy and fast route for me to get back to Misato from Akihabara ).
The theory of a quick journey to Akihabara was undermined a little by a few derp moments. First, we got on the wrong subway line and had to double back. After switching to the correct line, we went in the wrong direction and had to double back AGAIN (D’oh!). I think it’s safe to say that we were the omnishambles.
Eventually, we arrived at Akihabara.  It was a cool evening (well cool by the standards of a Japanese Summer) so the maids were out in force (unlike the last, roasting, day I chose). Shortly after leaving the station we passed the figure shop I normally use so I pointed this out to Graham who was interested in having a quick look. 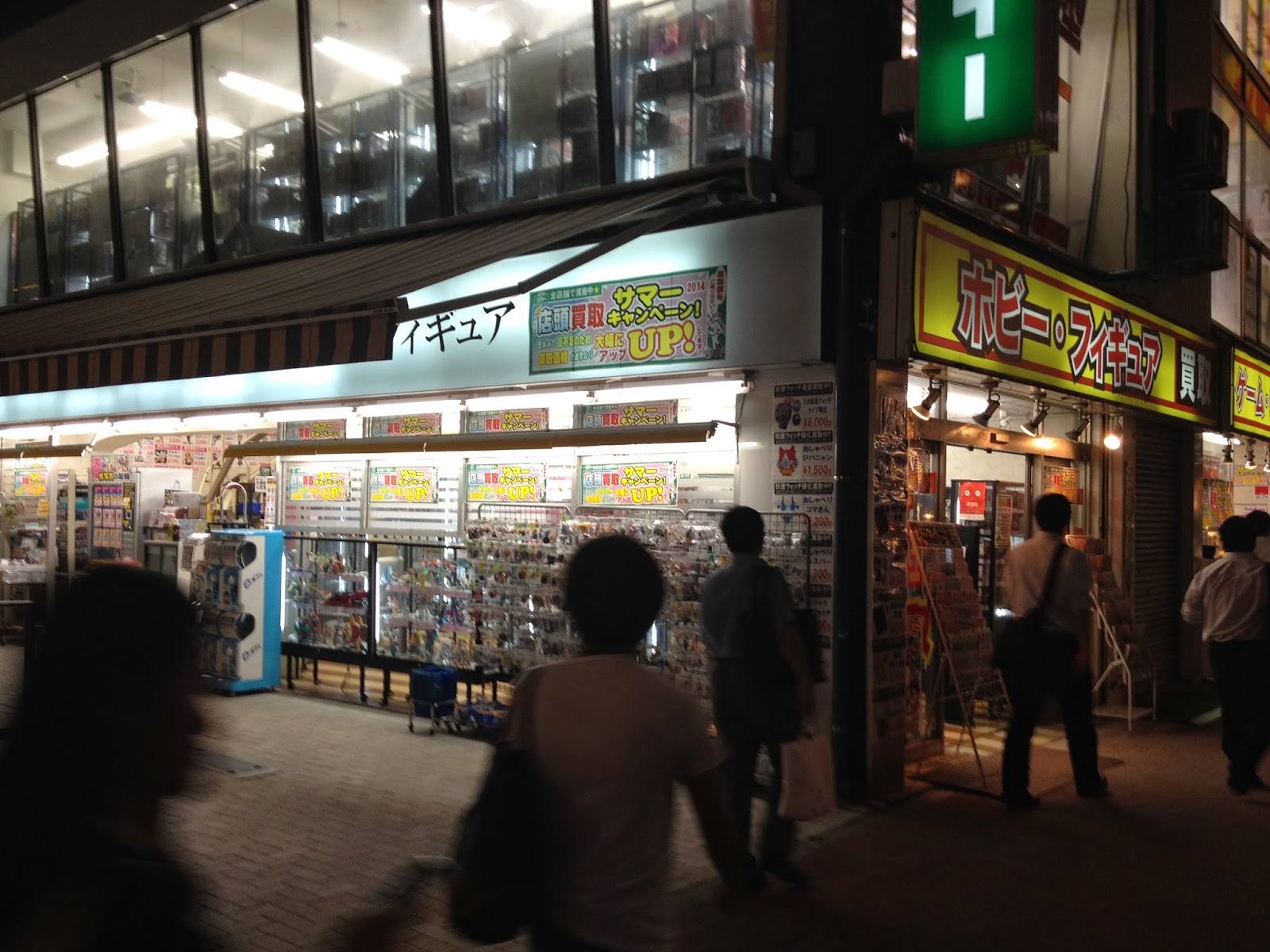 Besides figures we were also planning on checking out Super Potato. Sadly Super Potato had closed for the day by the time we got there so it was time to move on to other places. We also had a browse through some of the shops such as “Animate”, which was great as I hadn’t had much time to check them out last time. One of the more comical items I noticed in Animate was a box of Russian Roulette Cookies. These were basically the same as the “Tsundere Cookies” I picked up last year but with much more favourable odds (two out of twelve laced with cayenne pepper rather than the then out of twelve from the other box).
Posted by Daniel Snowden at 09:41