Firstly, sorry for the delays in uploading this and the subsequent blog entries.  What can I say, I've been out having too much fun and haven't had time to write.  Here goes:

Today was another opportunity for some solo exploration.  This time I had the opportunity to go back to the Asakusa district in Taito.  Those who followed my blog last time will likely already know that Asakusa is known for the large Budhist temple (the Senso-ji temple).

The temple complex is incredible and definitely worth a visit. There is also a nice market near to the complex (the picture above is in the market, approaching the temple gate)

In the complex there is also a garden, this includes a small pond with some Koi. 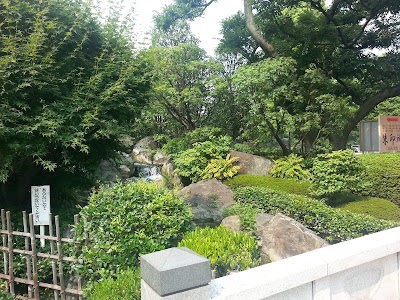 One word of warning, being a an old district, the layout can be confusing to say the very least.  While I managed to find the market and temple easily enough, I did need to use the portable Wi-Fi hotspot and Google maps to find my way back to the station.

Asakusa is served by both the Tobu Skytree line and the Tskuba Express (which I used as I was staying close to Minami Nagareyama on the Tskuba Express).  While there is also a Tokyo Metro station, this is a little further afield.

There were a few items on my shopping list this time.  First was an obi for my mother.  Last year I picked up a yukata for her so I suggested that this year I get an obi.  You never know when there might be a matsuri (festival).... right?....

Next up was 2 sets of wedding dolls.  I know a few people who are getting married and thought these would make a nice gift.  These proved a little harder to find than I initially thought but there are a few stalls selling them.  The ones I found are traditional style wooden kokeshi dolls.

On my way back to the station, I came across an artist who was using spray paint to create space scenes.  Being the first time I've seen this being done, it was interesting.  My parents saw something similar once in Australia. 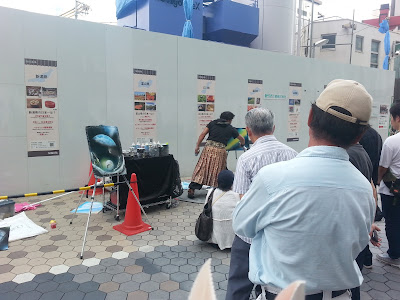 It just goes to show you never know what you're going to encounter and what surprises are in store.

Later in the evening, Kyle and I decided we wanted to face walking in the gruelling heat to LaLa Port (the shopping mall in Shim Misato) for dinner.  It's not Tokyo, but it has a good food court (and a place that sells sweet potato/aubergine ice cream - really!)

As a combination of heat and being on my feet all day, this was a pretty tiring day but well worth the effort.
Posted by Daniel Snowden at 05:02