Today involved a fairly early start.  We were meeting Kobayashi Sensei (the previous phonics expert from Kyles school) and had planned to make a full day of it.  The plan was to meet in Ginza station and go for lunch at a very exclusive restaurant.  On to Ginza!

The journey to Ginza took a little while, but this was partly due to an overly complicated route.  Travelling at a busy time, conditions were crowded to say the very least.  I'm glad I don't make that journey every day!

After meeting in Ginza, we headed to the restaurant.  This is the best sushi restaurant in Japan and has 3 Michelin stars.  Unfortunately, we didn't have reservations.  Fortunately we had a "Plan B", there was another very good restaurant nearby.
As I'm not used to sushi, this was going to be quite an experience.

Overall, it was an enjoyable meal.  The thing that surprised me most was that I preferred the sashimi to the dishes with rice.

En route, we saw that there is a Hooters in Ginza.  Moving on.

Next up was a tour of the "House of Representatives" of the Diet of Japan (the lower house, the House of Councillers being the upper house).  Kobayashi Senseis language skills (having a native language speaker) came in very handy.  Plus he is the one who suggested the tour, so Kyle and I are very grateful. 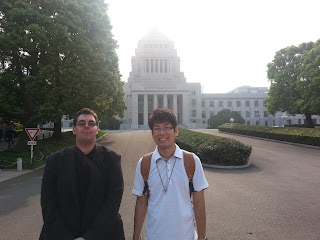 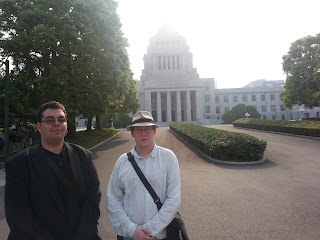 Following on from this, we had a look around Ikebukuro and the Sunshine 60 shopping complex and tower.  Unfortunately the weather limited the view from the observatory somewhat.

In the arcade we tried our luck at the House of the Dead 4 game.  Kobayashi Sensei further demonstrated his all round awesomeness as we actually managed to win against that damn thing.  What originally started as a 3 man rotation (2 playing, the 3rd swaps in whenever someone dies) turned in to just Kobayashi and myself.  My finger joints ached, some skin was starting to peel off my trigger finger but it was totally worth it!  Unfortunately, the sheen of victory was tarnished a little when I found out which character I'd been playing as.
Dinner was at a ramen restaurant, because my love of ramen is legendary!  Kobayashi Sensei recommended a great place, but warned that it's small and there is always a queue.  Queueing for what must have been half an hour or more in hot, humid conditions made this a feat of endurance.  Fortunately the ramen was outstanding.

So many thanks to Kobayashi Sensei for an incredible day.  I've already said that if he's ever in the UK I'll be sure to show him as many sights as I can.
Posted by Daniel Snowden at 06:08